A One-Act Play from the Chemo Room

The chemotherapy room at Howard Community Hospital is in the shape of the letter “C” Very comfortable beige leather armchairs make up the “C”, while the space in the letter is the nurse’s station. Each chair can be privatized from its neighbor by pulling a curtain around the chair. This affords a degree of privacy, because some people go to sleep while being infused with the poison ( I have done this.} Sometimes, you want the curtain closed because the person in the next chair is not looking too good. That can be a real downer.

Oncology nurses, in my book, are nothing short of angels. They greet every patient with a smile and, oftentimes, a hug or pat. They are always up, never down. Frankly, I do not know how they do it. I could not handle that job. Most everybody dies of this infernal disease.

You can see this hard, immutable reality in the nurses’ eyes. They know that you may not die today, but they are aware that the relentless black horse can be seen on the horizon, always galloping closer.
I commented to one of my favorite nurses, Cathy Primerano, that I could not imagine the emotional toll the job must take on her. I asked her how she deals with it on a daily basis. To my surprise, Cathy told me that there were downsides, but they were greatly outweighed by the benefits. Surprised, I asked what the benefits were.

She told me that every day she was witness to astonishing courage and the incredible will to survive displayed by patients. She marveled at how grateful the patients were for the care that they were receiving and that she could tell sometimes that the patients could see the end and they were at peace with it, yet they continued to fight on for one more day, so they could make Thanksgiving or Christmas to be with family, or to see a loved one graduate from high school or college, or get married, or to see that first grandchild, or the tenth. She said she was inspired daily by her patients.
She said that she sometimes wished she could do more for them and she told me how much she hated the disease for what it did to patients.
This Monday I was being infused in “my” chair, when I looked at the man in the chai 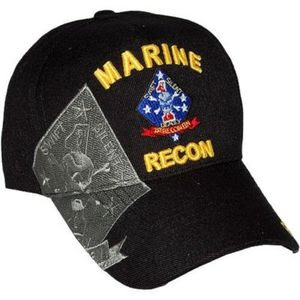 r next to me. At first I did not recognize him, as the liver cancer was doing its vile job on him. John was a former client and a good one. He had grown a beard and had lost some weight, but he was still a big guy, maybe 6’ 2’. He had with him an old leather motorcycle jacket that had long been in the wind and was scraped and bruised and smelled like motor oil. That jacket and John, as bikers often say, had been down a time or two.
But it was the baseball hat that caught my attention. Instead of “New York Yankees” or some other logo, it said “Marine Recon.” His VietNam service ribbon was pinned to the hat. Like the coat, that hat had been around.
“You earn that hat, John?,” I asked.
“Damn right, Mike. Hardest thing I ever did, almost. Three tours, one in infantry, two in recon, “he replied.
“I am impressed. You were one of the baddest of the bad,” I said.
“Well, it was a long time ago when I was just a kid. I was only nineteen. There’s no way I should be here. Should have been dead a hundred times, but here I am.”
“What kind of cancer do you have?” I asked.
“I have been fighting liver cancer for 5 years now and I am tired of it. It has beat me down. I am always so tired. I can’t ride my Harley anymore. I can live with that, but I can’t stand being so tired all the time. I can’t deal with it any more. Most days I just want to lie down and rest, but even if I do, I am still dragging my butt when I get up. I hate it.”
“What are you going to do, John?”
“This is my last treatment. I am going to tell the doctor I’m done. I feel like I have done what my family and friends wanted me to do. I have had enough. Five years is a long time. How long for you?”
“Almost three years. Too damn long for sure. You know, if you quit, you might only have a couple of months. That’s it.”
“I know. I don’t care. I should have been dead a long time ago. I’ve had three heart attacks in the last year. It’s time.”
He spoke with an air of finality and I could tell he had given it a lot of thought. Frankly, I did not know what to say after that. So, I reached over and shook his hand and I told him I appreciated that he fought for us in Viet Nam. I told him I would attend his funeral if I was still alive and that it had been a privilege to represent him in court. I told him that I wished we had gone for a ride together. I told him he should be buried in his jacket and especially his hat.
He laughed and said, “I hadn’t thought of that. That’s a good idea. Thanks.”
“I’ll be looking for that hat,” I said.

Mike out
Posted by BolingersCottage at 8:09 AM