We are here in Charlotte for the third time.

MUCH to give thanks for this year: friends from my home church are safe at home after surviving an attack by armed invaders. Most everything else pales in comparison.

Except. This trip was only penciled in: would Mike be well? Would he be alive? And my sweet sister-in-law, who carries the added weight of a brain tumor: would she be well enough? Would she still be with us?

Yes to all of this.


Even as of Tuesday morning, our trip was still ‘penciled in.’ Mike had chemo on Monday and by Tuesday morning, he was dragging. He may beg to differ but I did not plan our route nor pack up my clothes. When I got home from school --- I rushed right home – he presented the sweetest picture. He was deep asleep, blanket tucked under his chin.

So, I took off my shoes and snuggled up. About an hour later, he awakened. “What are you doing?”

“Come on. No time to waste on the likes of you.” (Bolinger cliché’)

So, an hour later than we had expected, we were headed south. Then it started to rain. Then we hit Indianapolis traffic. And more rain. We inched 15 miles in about an hour and Mike was getting frustrated.

“I’m heading home if this doesn’t clear up.”

But, once south of Indianapolis, traffic thinned so we continued.

Our route – because after 3 years, we have a plan – is to drive to Lexington, KY, where there is a dog friendly Hampton Inn. We pulled in about 9.

A word about the motel: there aren’t so many places that permit pets. When we booked our room here the first time, we figured, I don’t know, that you would notice an animal-ness to the place. As it turns out, except for a walking path and doggie playground, and the occasional bark off in the elevator, you wouldn’t know that canines are in the house.

This place is as nice as any Hampton Inn we’ve stayed in; we love Hampton Inns. Lexington is about 4 hours from home so it makes a good stopping point on the 10 hour trip to Charlotte.

We hit the road around 9 on Wednesday and arrived at my brothers around 4. My mom and my sister Jan had already arrived AND had hit the mall. 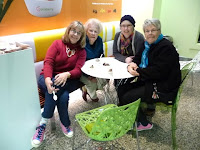 Janelle’s blog, as she takes her readers with her through her illness, mentions her trips to Pinkberry’s. She posts photos of whatever she orders. I had said, absently, that I’d like to go this yogurt place. So, after supper, and Cheesecake factory pumpkin pie (getting in shape for the Big Day), we drove over and had ourselves some Pinkberry’s.

Why oh why do we not have this place in Kokomo?

Of course, there were multiple trips to "Ken's" Starbuck's.

So, here’s the count at my brother’s house: Ken and Janelle; Mike and me; new bride Brittany and her Kenneth; sister Jan. And our mom, Evelyn. Then, by the time the turkey is ready, Cousin Jeannie, neighbors and other friends make the party about 20, ranging from 2 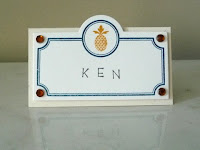 So many of these friends gather every Thanksgiving, Christmas Eve and Christmas. Traditions are precious and sacred.

Ken’s prayer joined us and he raised to the Father the needs of those gathered, especially Mike and Janelle.

How blessed we are to be a part of this day. Thank you, Father, from whom all blessings flow.
Posted by BolingersCottage at 4:18 PM