Is Anything Too Small For God?

Close Christian friends know that I struggle with taking the small things to God in prayer. I know.....we are to take all of our requests to our Father. Somehow, however, I've gotten the idea that I shouldn't' muck up His agenda with inconsequential requests. Like God has a finite amount of time and energy and I shouldn't be injecting some silly little thing.

With Mike's cancer, I have the understanding that requests in this area are the biggies, the kinds that we should pray about. But I still edit my needs when they strike me as small or a mess of my own making. I'm learning, though. 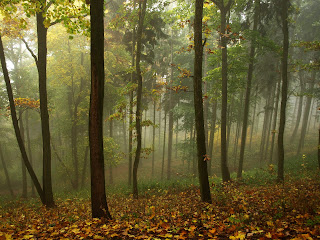 My husband is a man of many talents and interests. With what looks like our last of warm autumn on tap, he and his buddy decided to drive out into the country for some target shooting.

Another friend owns a patch of wooded land about 15 miles away. It is surrounded by fields, now harvested, and a smattering of homes. Our friend has built a tiny cabin next to a larger garage: in that garage he has quite a few ALVs and lots of other guy-stuff. It's great

fun to go out there and motor through a large, flat field.

Anyway, as is his practice, Mike brought Ivy along and let her out. She likes to run through the trees and see how many brambles she can pick up in her coat. Mike and Tom spent the afternoon disturbing rural peace. Then, I got a phone call:

These days, that can be the lead off to a long list. "What's wrong?"

"I can't find Ivy. We've been all over the place. We've called her. She's no where."

Then, the list of questions: Has anyone called? NO. Does Ivy have a collar? YES. Doesn't she have a tag on the collar?" SHE USED TO. (See "So Us" in October) What can I do? I DON'T KNOW: COME RIGHT OVER."

So off I drove, west, to Burlington. Then RIGHT. Then, LEFT on County RD. 350. Then, look for the cross road after the jog.

I got there 20 minutes later. Mike had the strangest look on his face -- worry, sadness, helplessness, resignation. We fired up the ATVs and drove the large field. We stopped. We called. No dog.

Zach and his friend Tiffany arrived. She's a country girl and came better prepared. (I was still in heels) She had pulled on some sweat pants and a pair of waterproof boots. More ATVs, more transit, more calling.

And the sun was setting. A chilll dropped into the air. I sat down on a bench and watched Mike as he paced and rubbed his arms. Now the face was all sadness. Maybe she was lost. Maybe she was hurt. MAYBE, oh I hope not, maybe she has been hit by a car or caught in a fence, or she has met up with a hungry coyote.

There are few hazards out in the country. However, there are hunters, mud pits, larger stray dogs, barbed wire fences, and water. Where could she be? What would we do? And even with a collar, a finder would have no way of contacting her owner.

I just slumped onto a bench, folded my hands and had a talk with The Father. I reminded Him (this is SO ME) that Mike loves this dog, almost to distraction. When I'm at school, Ivy is his constant companion. Did I mention that Mike LOVESthis dog?

Mike announced that he would drive home, get his various medications, a blanket and pillow, and return to spend the night.

I don't argue with him. 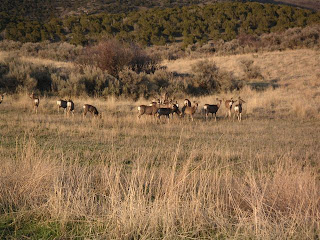 Tiffany needed to get home so I drove her along dark county roads. As this is deer mating season, fields get thick with roaming deer. They can be a hazard in the twighlight, so the trip home took a while as I was on the lookout for that doe that would crash into my car. A few more moments in prayer, asking for protection from those phantom deer, and another request for Ivy's return or a sure outcome.

As I got home, Mike was heading back out. He planned to camp in his truck, near the spot where he had last seen her.

Rural county folks tend to be generous and helpful. Several had been golf carting around since we had left. Still no dog.

One gentleman, wise, told Mike that there was no reason to freeze. "Look, why don't you lay your coat on the ground? We'll put out some dog food. She'll find it, catch your scent, and wait for you to return in the morning. And," he added, "we'll keep looking for a while."

I'm glad that Mike took that advice. He returned home, long faced, took a shower and prepared for a sleepless night. We prayed again and turned out the lights.

You may know how this turned out:

Ivy was found, was safe, was curled up in Mike's jacket. He threw on some sweats and was out the door again. Within the hour, the Iverson was back in her home. 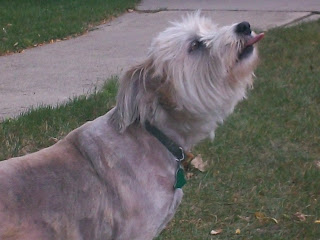 Today, she's sporting a new collar; a tag with all sorts of information (blood type?) AND quite a few big black brambles.

All is calm. All is bright.

Thank you, our Father. You love us more than we can imagine.
Posted by BolingersCottage at 6:35 PM