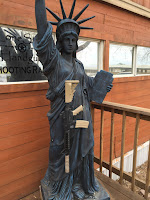 Google Earth helped me locate the address. It was way out in the country at a blank intersection of several fields. No building, not even a trailer. Huh. With faith in Ms. Garman, I drove out there, through fields reminiscent of Indiana after harvest. Blank, flat.  At the exact site, a hand-painted sign direct me to turn right and follow the flags that lined the dirt road., which ended at a shooting range/fingerprint center. Amid exploding clay pigeons, I exited the car and walked into the double wide. 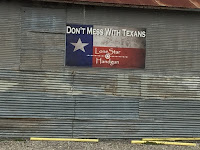 Upon several discussions, I found that in the State of Texas, fingerprinting and, I guess, background checks, are handled in the same places you buy guns and learn to shoot guns. And most of these places are out in the boonies so your rowdy target practice only startles horses and steers.
I found that I was NOT in the system and would have to reschedule.  “But not today,” said the official State of Texas Fingerprint Lady.
Frustrated. Eye rolling for sure. Reminding myself that all I wanted to do was help out. But I had come so far. I was determined to see this through.  On line, I re-entered the registration site and to my slight enjoyment, I saw that those multiple number log-ins were still there. Then I noted that tiny little space that I had missed before. Couldn’t they make it BIGGER? RED? FLASHING?
Rescheduled a week later, I made it out to the site again, got my fingerprints printed and my checkmarks checked.
No big surprise, I have passed my background check. Next up is the mandatory orientation for this school and I will be able to substitute.
I have recorded that 1) I am retired and 2) blissfully unconnected with the hard work that teaching is, so this may be a short career.