The Weather and Such

It‘s been a weird week for weather in northern Indiana.

I know. Talking about the weather? Next thing you’ll be working jigsaw puzzles between spells of sittin’ and rockin’.

Yeah, that’s us. When nephew Brian, all of 34, comes by, he and the hub BOTH age about 30 years as they ponder and reminisce, all while rocking. (Except, of course, when they take to racin’ in the lake) And me? I’m on my third puzzle.

So back to the weather. Last weekend we had very hot and humid. That’s one reason I made such progress on the puzzle. Not much desire to move around when it’s so hot.

Then, Monday brought darkening skies and temperature drops. We went from sticky hot to shivering cold, along with a clammy sense that a storm was on its way.

The gray and cold continued onto almost the end of the week. When Mom showed up to spent the night, instead of wondering if the fans would be enough, I went digging into the blanket closet and fetching hoodies for my guests.

So, when Wednesday dawned with no visible dawn, we expected another cold day. But then the clouds began to churn and the wind kicked up a bit: harbinger of storm.

Our cottage faces WEST, in the direction of most storms; as such, we can usually sit on our outside deck and watch the rain tap its way across the lake and move inside with plenty of time to avoid a soaking: one little game we play.

But this day was different. After several empty threats, the sky formed a solid and down came ‘ropey rain.’ Heavy, straight plaits that drenched the earth. 5 minutes later, the rain stopped, the sun came out, and within 30 minutes, sidewalks and other pavings were dry.

About an hour later, the sky grew dark again. A sudden gust of wind that died as quickly, and heavy droplets fell --- plop plop plop – for about 30 seconds and then stopped.

At which point, our neighbor Jenny walked by and said we should come over for pie. Sounded like a plan. She and Hal are full time residents. Their home faces out the lake from a glassed-in porch that opens to a large deck. They are good friends who live only a few dozen yards from us PLUS they had pie so we were off to their house.

As we sat outside, talking about the weather and munching on warm peach pie with vanilla ice cream, the sky began to churn again so we moved indoors to finish our dessert in the dry. Again, a cloud burst of sorts, this time with some sideways wind.

I finished my pie first (!); Mike and Hal were all about some discussion of the weather report on The Weather Channel, so I excused myself to stroll back to our porch. I walked as the sun again dried the ground.

Inside, (really this is going somewhere), I had just taken my seat in the puzzle corner when the wind/breeze stopped, dead still. Then there was an enormous CRACK of thunder and a WHOOOOOOOSH that shook the house. I ran to crank in our windows that take the brunt of eastern winds as the skies opened again, this time with a torrent AND the wind.

That initial ‘whoosh’ took another swipe at our red maple in front. Island trees have shallow roots and the last time we had a big wind storm, our tree developed a bit of a lean. Now there is a crack at the surface: it may be a loss. 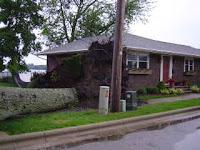 And then Storm 4 was over and the whole Island Neighborhood was out to survey damage. A few limbs here and there and then onto Hal and Jenny’s home.

Down the street, that gust uprooted a much larger, mature tree. It left a 5 foot hole as it leaned toward many houses. 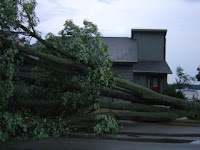 It fell squarely in the middle of the street. Not a single residence was damaged. That's Hal and Jenny's home, behind the tree. 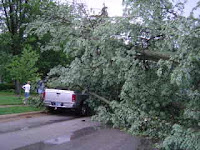 It DID crash onto Hal’s truck. He loves his truck. It also scraped his ‘vintage’ van. 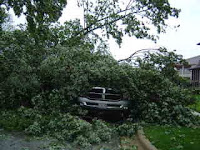 Clean up began almost immediately but it will require some finesse as certain heavy equipment is not permitted on the island. No one was hurt and all but that truck can be duplicated.

What struck me is that in times like this, when “it could have been much worse,” we talk of coincidence.

If I’ve learned nothing else in the last two years, I know that for God’s people, there are no coincidences.
Posted by BolingersCottage at 2:35 PM