It’s a trick to change residences. What to bring? What to buy? What about mail? And so forth.

What to bring? We already are in the habit of two sets of contacts/glasses/wetting fluids/toothbrushes/deodorant, so not much problem.

As for clothes, well, it’s the lake. Casual to swim suit is de rigueur.

What to buy? How many bottles of ketchup do YOU have?

The news is that Mike had another chemo treatment Monday. Sister Jan had arrived late Sunday night and we spent the next morning on errands and such. Then, we all came north.
Chemo jumps the hub and he finds it hard to sleep the first night. So on Tuesday morning, when Jan heard someone up before dark, she assumed it was her formerly early rising sister and came downstairs to find Mike up and dressed. Not sure what they did, something about a trip to the woods. Sister Lynne stayed abed until about 8:30.

Later, Jan left for Michigan and will return today. Also on the way are my brother Ken, his wife Janelle, and my mom. All will converge tonight and then Ken and Janelle will leave to Illinois, with Mom and Janis following on Saturday.

Whew! This is the most scheduled we’ve been. Today, cool air and all, we slept until

As for lake life, we’ve had several whitheringly hot days. Since we have no air conditioning, we are at one with the temperature. For those too young to remember life before central AC, what that means is that you, by necessity, slow down. Sit a lot. Eat a lot less. Chewing generates heat, I've heard. Drink more water.

I have found a spot on the screened porch where I sat up a jigsaw puzzle table. I have a history with jigsaw puzzles and will save that story for another time. On a hot day with an occasional breeze, I can sit, not move much, the work my brain a bit. Then, as a gust of lake wind flows, I can just sit, refreshed by the cool.

After several weeks here, when Mike had fixed everything he plans to/can fix, he was getting a bit restless --- some of us are better suited for sitting than others.

“I need something to do,” he said. 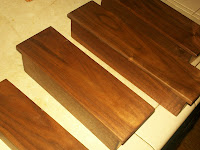 t you just know it? Just before the move, he had announced that he was done with big furniture pieces and started making wooden boxes. These found a place to cure, right on top of my dishwasher.

So I asked him what he needed up here to make boxes.

He thought for a moment and then, “I wonder how much an inexpensive table saw would cost?” 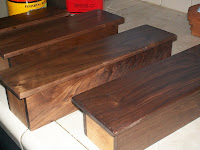 As it turns out, the saw was rather cheap. He said, “I could make boxes if I had my small tool bench.”
“Why don’t we bring it up?”
What a team.
So, Zach loaded it up in the truck and now it’s on the front porch, near the Puzz Table. We can both play and keep each other company. 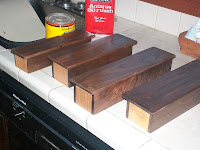 Mike is merrily cranking out boxes. There’s more to it, of course, than the saw; his finish work takes my breath away.

As does he, every time.


Posted by BolingersCottage at 3:34 PM