Most of us, particularly men, define ourselves by what we do for a living. Anytime two men are introduced, after the exchange of names, the first question one man will ask the other is "What do you do?" I am not sure why this is, although I have some theories. What is important is that most people take some degree of pride in what they do. Most of us want to be known as good at our work. Most people treasure complements on a job well done. Most people try to improve their work skills and take pleasure and pride in being increasingly skillful. Hopefully over time and opportunity to practice, we advance from being competent to skillful. Some few advance to being artists.
Most of us realize that we are not the best at what we do for a living. I practiced law for 33 years and I can assure you of at least two things: (1) I was a long way from being the best lawyer and (2) despite constantly striving to improve my skills. Once in awhile I would be interviewed by a potential client who had read one of those "how to pick a lawyer" books. The inevitable, amusing question I was asked was "Are you the best?" My stock response was "I am better than most, but not as good as a few." This honest, smart-mouth response seemed to satisfy most of my interviewers.
Several years ago I decided that I wanted to learn to build furniture and to play the guitar. I have no idea why. These two activities simply appealed to me. I am a person who has to alway have a project to work on that involves using my hands. Being able to use your hands to accomplish a task is a learned skill. It is part of my nature, I guess. I take pleasure in learning to do new things, like building a kayak or boat, rebuilding a car or motorcycle, or how to fly an airplane. All these things require hand skills to be sure.

So I began to teach myself how to build furniture and to take classical guitar lessons. My first furniture projects were pitiful. Even before I finished a piece, I could see many ways to improve it. Each improvement got utilized on to the next project. Over the years and many projects, my skills improved. People now see something I made and usually comment positively on it. Even so, I can always see things that need improving, but to my surprise most people do not seem to notice.
I took classical guitar lessons for 15 years. I practiced daily for one hour and sometimes more. I worked at it. My teacher said I was the best student and had gone the farthest that he ever had. But I played like crap. Trying to play classical guitar is the hardest thing I have ever tried to do and I failed miserably. I just could not do it. While I loved the music and the guitar, I simply could not acquire the technique that playing that instrument requires. However, it turns out that not all was lost, because after I had finished my hour of practice, I began to fool around with old blues and ragtime tunes that I thought were fun.
When I would go to my classical guitar lesson, my teacher would ask me to play some of that "blues sh--" for him. He used to watch me closely and then say "How do you do that?" I didn't know, I could just play it. I am not telling you I am a grat blues musician. I am not. But I liked the music and it is fun to play. If you miss a note playing some old blues thing, chances are nobody is going to notice. Not so with classical guitar.
A few years ago my church installed a coffee shop next to the reception area. The idea was to get people to come to church early, meet people and hang out before the service. My church is very large and there is the possibility that someone might intimidated by the number of people attending. The idea behind the coffee shop was to get people to socialize. It was a good idea, but not many people were used it at first. To fix this problem it was decided that some of the musicians would perform on a small stage in the coffee house 30 minutes before the start of the service. Good coffee, a donut, and live music would go a long way to get people to loosen up. To my surprise and delight, I was asked to pla
I worked up a list of blues and ragtime tunes I could do and even threw in a couple of classical things. I was very nervous about playing on the stage by myself. Nonetheless, I walked out, sat down on a chair on the stage and started to play. After about 3 minutes, I had relaxed and was actually enjoying myself. You do not hear the music I play anymore since it goes back to 1920, but people liked it back then and they still do. I played through my set list and was feeling pretty good. I could tell by the response of the audience that they like the music and several people smiled, clapped or said something positive.
I saved an old Blind Blake tune called "West Coat Rag" for the end. Nobody ever, n 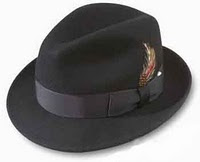 ot now, not in the past or in the future could play that piece like Blind Blake. But I had simplified it a bit and I took a shot at it as my closing tune. I was ripping along through it and feeling pretty confidant when I looked up and there about twenty feet away from me was a line of 7 guitarists watching my every move. I promptly flubbed the next 4 measures, managed to pull it back together and finished the tune, ending my set. I walked off the stage upset with my performance.
I learned that it is one thing to play for an audience, but it entirely different to play for an audience of guitarists. These guys know about playing the instrument. You cannot fake it in front of them. They know. You cannot hide. Mistakes are obvious to them. 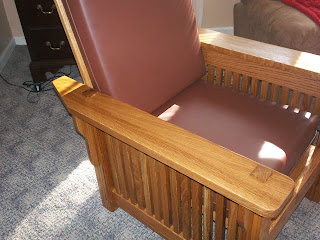 Last week my wife and I were having lunch in a local restaurant. It was obvious to my wife my mind was on something besides her, so she asked what I was thinking I told her that I was trying to devise a way to cut two 2" square holes in an armrest for the chair I was building. It seems simple, but it is not.

It is easy to mark off the two squares with a pencil. It is not that hard to cut the holes, either. The trick is that the holes must be perfectly cut so that a square peg from the chair leg comes up through the armrest. Even that is not difficult conceptually or skill-wise. I could teach anyone in five minutes how to cut a 2 inch square hole. The difficulty is with the precision required.
Consider the four pencil lines that make up the outline of the 2 inch square hole. Cut along the lines you say with your razor sharp chisel? All right. Inside the line, outside the line, or should I bisect the line? And remember if you take too much off or are slightly off square, a gap will appear and, even worse, the other hole will not line up and there may be yet another gap. Not so easy is it?
After I explained this to her, it suddenly occurred to me that she was like my audience of guitarists. I said to her, "When I am done with this chair, the first thing you are going to look at is whether there are any gaps around the pegs, right?" "Of course", she said. If I had kept my mouth shut she would never have known.
Perfection is an unyielding standard. Perfection cannot usually be achieved by anyone other that a person who is an artist in a particular field that is on display. If Blind Blake heard me play "West Coast Rag," he would probably laugh and say "Nice try, now let me show you how it's supposed to go." If Tage Frid or Sam Maloof, two of the finest woodworkers in America looked at my chair, I am sure they would find mistakes on it that even I do not see. If Christopher Parkening or Leona Boyd heard me play classical guitar, they would probably run screaming from the room. And justifiably so, believe me.
So what is the point? Hardly any of us will ever achieve perfection in what we do professionally or for fun. Most of us will continue to try to do our best and increase our skill level. We might even get good enough that most people view us as very talented. But the goal should be to produce a perfect product. The next time I play "West Coast Rag" it should be better than the last time. The next time I cut a hole in a board for a peg to go through, the gap ought to be smaller. Perfection shall remain elusive, but you can always get better.
Posted by BolingersCottage at 5:20 PM