Random Thoughts on Flying and Swimming 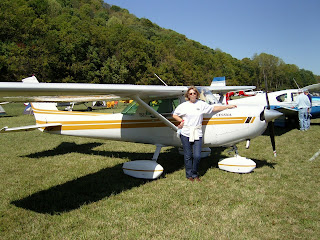 I went flying Monday in Tweety-bird, my almost pristine Cessna 152. Tweety reminds me a lot of my lovely wife, the Lynne. Considering their respective ages, they both still look good to me. Both have a few dings and scratches here and there, but both are still solid structurally, and are very aerodynamic. Both of them look slick with a fresh coat of wax, or make up, although the Lynne doesn't have a polished nose spinner like Tweety. Push the throttle in on either of them and they will both scoot right along, plenty fast enough for me, anyway.
I took off with no particular place to go, so I decided I would fly up to Winona Lake to make sure it was still there and thawing out for the anticipated "last summer." I climbed to three thousand feet, set the throttle and trim and drifted along at 110 knots at 2300 rpm. I turned off the radio, the GPS, the transponder, then clamped on my headphones so I could hear almost nothing. I scanned the fuel and oil gauges. And relaxed. Occasionally, I made a minor course correction, but Tweety knows the way. She knew we were goofing off. So on we flew, until the lake appeared over the nose. We inspected the lake, confirmed it was thawing out, and rolled into a 60 degree bank to head home.
The weather was down to about 5 miles with a 2500 foot ceiling, so I tucked down underneath it. The air was smooth, so I decided to go lower. I leveled out at a thousand feet above the ground and went sight-seeing the rest of the way home, watching the farms come and go. The occasional cow or deer wandering in a field below. And there was the reservoir thawing out, waiting for the weekend boaters that will arrive with children, picnics, campfires and camping tents. It does not get better than this in an airplane. Your own leisurely, airborne stroll over the countryside. Your own personally guided personal tour. Such luxury!
Ten miles out I turned the radio and transponder back on, called Grissom Approach, then called Kokomo and reported in. Six minutes later, the main gear chirped on the runway and I was home. As is the family tradition, I announced to no one that "I had cheated death once more." I taxied to the hanger, wiped down Tweety, and put her away.
I owe all this to my Dad, who taught me many things, but most of all how to fly. Really fly. It is such a privilege. So few do it. I miss that man. He has always been my hero.
After I landed, I went to the YMCA to get my mile in the pool. I had three hours of chemotherapy that morning. I kept anticipating the arrival of nausea, but it never showed at the pool.
Believe it or not there is fast and slow water. Ask any swimmer. Some days you get in the pool and you swim like a shark. Strong, straight, and relentless. And some days someone tied a concrete block to your butt, while you swim in glue.

Monday was a shark day. The water glided off my shoulders, each stroke was pulling, and I wasn't even breathing hard. I was gliding in fast water. This, too, is a joy few people experience. I am no athlete, but if you ever see me swim, you would think I am. Most people say I make it look easy. It is what my wife says. She loves to watch me swim. And that is what did me in that day.
I go to great lengths to try to present a positive role model for the countless people who are watching me in these last months. I am nothing special. I am just sick. I can't do anything about it. I am going to die and that's it. I am not "fighting it." That is so silly. Nobody fights this disease. "Fighting it" is what people hope you are doing, so that when they get it, they can "fight it, too," and get well. I have news for you, gang. There is not a lick of truth to any of it. Not for me, anyway. I just keep trying to put one foot in front of the other, until eventually I can't do it any more. And then I will die. It is simple, really.
On that Monday afternoon in the pool, I discovered that no one can see you cry in the pool. Not while you are swimming, anyway. The thought of losing the Lynne is simply unbearable to me.
Mike out.
Posted by BolingersCottage at 8:48 PM