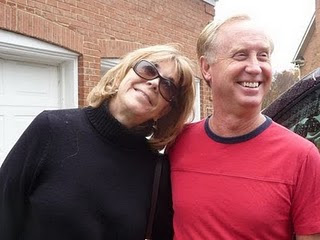 A return trip to Charlotte for Thanksgiving. Much to be thankful for this year. My brother Ken and his unflappable wife gather a gaggle and place TRADITION on their table.

We visited last year and had much fun. They invited us for a return but at that time, we really didn't think that would happen.
However, once again, we jumped into the truck, a roomy, comfy thing and headed south. We left Tuesday after school and drove to Lexington, where we had found a Pet-Friendly Hampton Inn. That meant, of course, that Ivy got to go. We explained to her that once in Charlotte, she would have to share table scraps with another dog. She considered it and decided that yes, she was up to that.
Uninterupted time: what a gift. He with his Blues Tapes and me with my 75 essays, comparing characters in The Great Gatsby, and Ivy all stretched out between us. The weather was fine. The roads not too crowded. The rest stops spotless. And that Hampton was spotless. So the trip was good.
As a child, I had taken many car trips, to Herrick, Illinois and Decorah, Iowa. These were so long but occasionally, Dad would turn on the radio and let us listen to popular music. I assume Mom was asleep. So, what fun! Mike tuned into XM 50's and we found that we knew a lot of the words.
"OOO EEE, OOO Ah ah, bing bong, walla walla ding dong"
"Hello mudder, hello fodder, here I am at Camp Granada"
"A WEE ma wappa, WEE ma wappa, Wee ma wappa, WEE ma wappa....the lion sleeps tonight"
On Wednesday, we toured the Smokeys, the Blue Ridge Skyway, and the hills leading to Asheville. Even with a GPS plus my brand new smart phone tracking system, we ended up a bit south, as in South Carolina, and then stopped at a rest stop. There stood two state policemen who were being interviewed by a television crew.
"Go ask them where we are," said the hub.
I approached them and waited for the camera man to wander off.
"Excuse me, I hate to interupt," said I.
"No may-hem. This is ma job. What kin I do for you, may-hem?"
He gave us great (GRAT) directions. Son Zach filled in Wednesday as a substitute teacher. He caught a late flight and so joined us.
So off to Charlotte, Ken and Janelle, their kids, several neighbors, my mom, and a cousin or two. Son Zach had filled in Wednesday as a substitute teacher. He caught a late flight and joined us.
Thursday, THE DAY, is Ken's day. He starts at 5 AM and follows his spread sheet. "In oven 12:30, Out of oven 12:49" They have a working kitchen with two ovens and by noon, there's a flurry of activity. As guests, our job is to wash our hands and show up at the table at 1:45. Got it.
Friday morning, it was time to hit the road for the return trip. We have a standing invite for 2011.
Posted by BolingersCottage at 11:52 AM