In the years following the Allied victory in World War II, the British government was eager to convert its war production to domestic production. Quite simply, the government needed revenue. Victory freed the citizens from the rationing that had controlled their lives during the war years. They wanted new cars and all of those labor saving devices the Americans had in their households.

Noting the desire of its citizens for new cars, the British government announced a tax on the purchase of new cars. The tax was to be temporary. It was to last until the government got on its feet. Of course the British still have the tax on new cars. The government did not lie, either, in declaring that the tax was temporary. It was temporary. It lasted until the tax rate could be raised. There is a lesson to be learned here.
About the same time as the new tax went into effect, there was a young aeronautical engineer named Colin Chapman. Chapman wanted to manufacture cars. Really, he wanted to go formula car racing, but he did not have money to finance a team. He needed to raise money to support his racing ambitions. How could he do this? By manufacturing a car!
What Chapman had going for him was a great deal of practical engineering talent, the easy availability of war surplus steel and aluminum, and a sharp business mind. Chapman discovered that if he built a car which was essentially a rolling chassis with no engine or transmission installed, the government did not consider it to be a new car and, therefore, it was not taxed. These were the circumstances under which Lotus Car came into existence.
The Lotus Seven was Chapman's first car. He advertised it as a car you could drive to work on the weekdays and race on the weekends. All the owner had to do was find a suitable engine and transmission and install them. 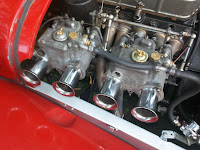 The first Lotus Sevens were constructed in a converted horse stable in the English countryside. The car had a frame made of triangulated, steel tubing over which was riveted sheet aluminum, which made up the body. Chapman sent a mechanic to the wrecking yard a couple of time a week to buy any front steering unit and rear end that was available. He designed the Seven so that any number of current British cars could supply the suspension pieces. It is a fair statement to say that no two Lotus Seven's are a like.

About thirty years ago I was having dinner with a friend. We were talking about the various cars and motorcycles we had each owned. My friend casually mentioned that he had a 1964 Lotus Super Seven. I remarked that I knew what that was and had always admired the car, although I had never seen a real one. He told me that his was stored in the back room of a car dealership in Logansport and that it was a rare right-hand drive model. 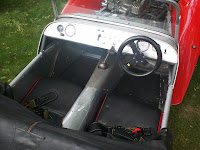 I thought about the Lotus from time to time for the next 30 years. Three years ago I was having dinner with the same friend and I asked what had become of the Lotus. He told me that so far as he knew it was still in the back of the dealership as it had been at least twenty years since he had looked in on it. I asked him if he minded if I took a look at it. He said he did not care.

The next day I walked into the back room of the car dealership to check out the Lotus. It was sitting in the far corner of the storage area. It was half covered with a dirty tarp. All four tires were flat. One its two carburetors was disassembled on the driver's seat. It was covered in thirty years worth of dirt and grime. But it had not rusted. There was no body damage. It looked like all the bits a pieces were there. I had seen worse. Much worse. There was hope for the car.
The car crouched there and whispered to me. She said, "I was a good car once. I could be a good car again. Somebody just needs to love me. If you leave me here, I will die. Take me home with you."
I responded by saying, "I will be back for you. I will not forget you."
(editor: My husband talks to cars.)
I immediately called my friend and told him I had a proposition for him. If he would deliver the car to my garage and pay for the parts, I would do the restoration for free. The Lotus arrived the next day on a wrecker. 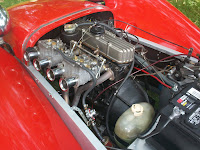 I will not bore you with the details of the restoration, but let me say just three things: first, John Heydick did a masterful job of rebuilding the engine, which runs like a small tornado; second, Tim Donato did a wonderful job rewiring the car: third, I took apart everything down to each rivet, bolt, nut and screw and rebuilt the car.


Here are some pictures of " Lynney Lotus." All the fiberglass is original and has not been repainted. The car is unusual in that it has not been raced or modified since it was originally made. 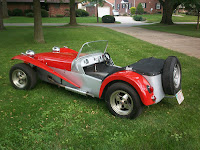 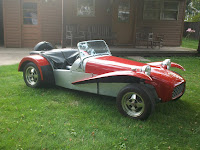 I love this car. She is a joy to drive. She isn't fast, but then, who cares? She is a piece of British history. She is a good car. She just needed someone to love her. We all need that.

A famous British automotive journalist once described a Lotus Super Seven as a "saucy lass who likes to hike up her skirt and go dancing." Perfectly put. 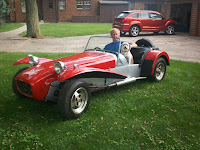 (editor: and speaking of a saucy lass, who's your co pilot?)


Mike out.
Posted by BolingersCottage at 8:08 PM