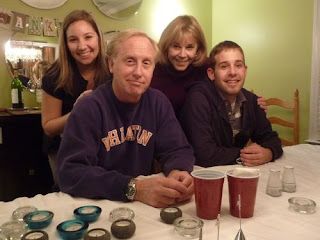 Over the river and through the woods, to Charlotte, NC, we go
The horse knows the way to carry the sleigh in the white and drifting snow-oh

Over the mountains, actually, as in Great Smokeys, in eastern Tennessee. Even as the trees are bare, for those of us who spend our days surrounded by flat, winter cornfields, any hills rise magnificently in front of you anytime you head south.

The hub and I decided to invite ourselves to my brother’s house in Charlotte for Thanksgiving this year. As we prepared to leave, I realized that in 35 years of marriage, we have never celebrated the great feast with my side of the family. As Mike always worked on the day after, it seemed like a too-big effort to drive to Michigan, eat and leave so the easier choice was to stay in Indiana with Mike’s people. (mine, too, by marriage)

This year was different. My brother and his angel of a wife Janelle host the feast each year with Ken doing all the cooking. He’s a math guy so he prepares a spreadsheet with tasks, times, and comments, and the meal appears, all of it, on time and hot. The guest’s job is to show up on time, get those hands folded, and eat. We got the easier job. I practiced.

Janelle, by the way, is a woman of many talents, not the least of which involves living with a Hayes for so long. She authors a blog you should check out:

I knew that they had hosted this party every year but when I called, I asked first if they had made other plans this year. Wouldn’t it be just our luck that on this year of new adventures, they might be going somewhere else? But no, they expected a crew, around 20 hungry pilgrims, to break bread…they were having other things as well…at their table on Thanksgiving. So I told Ken that we’d like to come; he said that we had made his day.

We set out on Tuesday morning in Mike’s Chevy truck, loaded down with sandwiches and sodas, plus some beef jerky. We also stockpiled books on CD. Our destination was near Deals Gap, that stretch of road where Mike and Dale like to tempt fate with their motorcycles.

Driving south is usually a joy, as Indiana’s southern hills turn into various parts of the Appalachians. As the hub required, we had REAL MAPS and we fired up the GPS and the radar detector. Traffic was light although we spotted many many many state patrolmen, those sneaks.

The hub had instructed me to find a simple place to pass the night: small and cheap. And I did. When we pulled into the ‘parking lot’ and located ‘the office,’ an autumnal woman walked slowly to the locked door and let us in. It was cheap. It was small. And the hub said, “Let’s go on to Asheville.” So we did.

Although the hub, world traveler that he is NOT, says he doesn’t like ‘vanilla motels,” (please, someone, WHERE did he get THAT term?), we moseyed into a Hampton Inn, my new favorite as I am amassing points. I think I need only 50,000 more for a free night somewhere. Or maybe 100,000. No matter. We racked up another 50 or so and enjoyed a great night’s sleep. Then off to Charlotte.

Except there is a Ducati dealer in Asheville so we paid them a visit. We found several bikes that we really need and heck, we have the truck and all….of course, they will ship to us…but the hub said, not yet.

Then, as we drove into Charlotte, the hub, who continues to surprise me every day, said, “I think they have an IKEA store in Charlotte.”

Huh? A store? YOU want to go shopping?

In case you don’t know, and before November I didn’t know, IKEA is a brand of Swedish goods that can fill one’s home, from furniture to cabinets, to rugs, to dinnerware, to doo dads and goo gaas.

The store is huge, the biggest one I’ve ever seen. And everything you look at is beautiful and it’s all displayed beautifully. AND, once you begin to stroll through the store, you really cannot get out until you’ve walked past every item. The aisles twist and wind back and forth past plates and glasses and mirrors, and couches, and kitchen utensils and frames, and tables, and …..

As you finally think you’re approaching the check out, there’s a snack bar selling fresh cinnamon rolls and coffee, you know, to revive you from your hike. And even if you don’t fall for the goodies, that aroma wafts around you.

We thought we were just looking but we left with a step stool, a cabinet and a chair for the workshop.

Then, on to Ken and Janelle’s. They live in a lovely, roomy house. I’m betting when they are the only ones home, its size seems adequate. However, we were adding to their homestead, as was my mom and niece Brit and her young man, Kenneth. All these folks slept soundly and then breakfasted as the Man of the House began his chef tasks.

Mom was between cruises and parties so Charlotte was a chance to catch her breath. She returned to Melbourne, FL the next Saturday for a flurry of holiday get-togethers before she will fly out to Los Angeles for Christmas. Just hearing her click off her December agenda makes some of us tired.

Janelle’s table was decorated with her handiwork and I can’t do it justice here, so let me just say, you have to see it to believe it. Check out that blog, I’m serious.
Mike built a small table with a drawer for Janelle and Ken. I think they were pleased. The photo above is us with our niece Britt and nephew Ian at the table ‘after.’

Thank you, baby brother (I know, cringe, but I mean it with love) for setting out a traditional feed with all the goodies.

Although Ken and Janelle are kin, we haven’t spent a lot of time with them over the years. So, they were pleased that we were coming and hoped it would go well. What they did NOT know was that God was setting them up to do special things for Mike.
Mike hates turkey. Our family Thanksgivings have included ribs, tacos, egg rolls. Mike likes orange juice in cartons and really really likes what he calls ‘Lumpy applesauce.’

The other day, Janelle sent us a card (hand made, of course) and in it, she recounted what she saw as some special hugs that God had given Mike at Thanksgiving.

“1. OJ and SPRITE. We rarely have either in the house…(they purchase, if at all, small amounts) If we had done that this year, there would’ve been none left for you.”
“2. Chunky Applesauce…Ken has never bought chunky applesauce before. In fact, he usually just grabs the smooth…this time he read labels and chose different. Different isn’t normal for him”
“ 3. Ham..we’ve never had ham for Thanksgiving, no matter how many people we were expecting. Always turkey. Always. Never even thought of ham. Never even considered that someone might not like turkey. Now we know.”

More hugs from our Father.

I was seated next to a neighbor, a junior in high school who loves literature. Imagine! We had such a good time, eating and talking. Cousin Jeannie and Mike discussed the South and the Civil War. Ken smiled throughout and Janelle, ever serene, never fluttered an eyelid.

It was your normal American Thanksgiving….food, talk, football, more food, more talk, until heads began to nod. Another great night’s sleep and we turned the truck northward for the drive home.

We had so much fun, both together and alone in the truck and with family and new friends. Ken and Janelle have made notes for next year: Mike likes ham.
Posted by BolingersCottage at 8:29 PM