We gathered the troops in San Antonio this year for Christmas. It was a repeat of last year but what a lot has happened in a year! 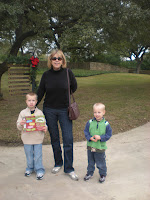 Auntie took a trip home so it was just Bolingers and Fewells in what seems like a big house until we all descend. Allyson, resident superb, got 7 days off which is unusual in the Army. We had time to talk, eat, play, eat, read, eat, etc...

The pile of presents approached what Jean Shepherd called "the bacchanal that is Christmas" and the boys' eyes were as big as saucers when they spied the tree on Chrismas morn.

He read. He's a good reader. He intoned where he should and paused effectively, for the adults. The children were, let's just say, squirmy as they tried to divert their attention from the presents. 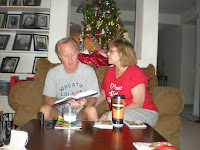 At one point, Mike said, "Then they withdrew..." and our eldest grandson lit up and said, "DREW!"

Who says there's not something in scripture for everybody?

The Bible was closed; the games began. It took an hour.

Then, performing a first-time Christmas Day task, the grandma prepared the dinner. Really, we have never done this in all our years. In our Kokomo home, I would make a big plate of yeast cinnamon rolls and an egg casserole and we'd eat it throughout the day, many times staying a-jammied. Not this year. WE had ourselves a feast, the meal I know how to make: Roast Beef and Mashed Potatoes, Gravy, green bean casserole, yeast rolls and butter.

Allyson set up her camera and took three pictures of us all....everybody has his/her best picture so I will post and let the readers decide.

At any rate, we past through another holiday season. What did I give my husband on this special day? What did he give me? Please humor me: we wrapped arms around each other, hugged, and told God thanks.
Posted by BolingersCottage at 6:35 PM