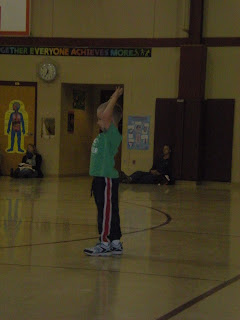 It's a balmy 61 degrees this afternoon. At night, it gets a bit cool, 45 or so. How quickly you can acclimate to find THAT cold!

I belonged to the later until I became a grandma and then, poof, you morph into one of those tale tellers.

I remember that when Drew was an infant (and circumstances brought him to live in our home so I got to spend a lot of that first year with him) (oh, yeah, and his parents, too): I could sit and just stare at Drew for a what sounds like a ridiculous amount of time. He did not do much, being a newborn and all. But he held a magical fascination for me. Much more that either of my children did, and their draw was awesome.

Wondering only briefly if I was weird in this, I ran this 'stare at him' thing past other grandparents and what came back were knowing smiles and nods.

He's 5 these days; actually he's 5 1/2 and quick to tell you. He's all about kindergarten, riding the bus, taking his lunch, and learning to read. He's also a really silly kid with a giggling sense of humor. No one finds his jokes nearly as funny as HE does.

Today, we went to his basketball game. He's a LAKER. #5. The league is for 4 - 6 year olds and I'm guessing for the hard core fans, you might find it frustrating. But for this gramma, it was pure fun.

They play 6 minute quarters and they don't keep score. (Some parents/grandparents do.) You can see that the coaches are teaching the fundamentals...dribbling, passing, shooting (...well...) and guarding. "Hands up," from any coach, and all hands go up on both teams. It is not uncommon for a coach to pick up a player during the game and run him to his location.

Auntie warned me that sometimes the team loses interest in the action. Last week, I guess, several players noticed an in-floor electrical outlet at mid court and stopped to examine it. No one called foul.

Of course, MY grandson played well. He got to bring the ball down the court and dribbled like a 5 year old pro.

Then, because "5 year olds DON'T take naps," Drew and Gramma went on an adventure, just the two of us. We had a goal: new shoes for basketball. The current shoes are worn thin on the bottom and although Mom's advice was "lick your hand and rub it on the soles like MY parents made me" (???????), Gramma thought better of that plan.

So we drove to the mall as Noah stayed home and napped. We were successful and so stopped for ice cream. Drew noticed the frozen cakes and he asked me what kind of cake I had for my birthday.

Then, and here comes the cute story: he reached over and ran his index finger from my nose to my mouth. "You know those lines you have here?" (YES) "Well, when you have them all over your face, THEN you're too old. But you don't have them all over."

So we bought a cake and will celebrate tonight before I sprout more lines.

Not a lot of a point here. Just loving my grandbabies.
Posted by BolingersCottage at 3:39 PM