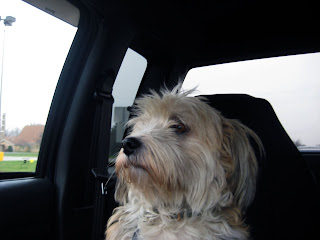 It had been a while. Our Princess, she of undetermined breed, although we are certain that there courses royal blood throughout her body, was in need of a trip to the groomer.

A new place in town, offering all sorts of perks, including a paw-de-cure, caught our eye. Zach, with coupons in hand, drove the Princess to the salon.

The owners required a detailed check in history including 'Breed." hmmmm. Zach wrote,

The hub has determined that this is her breed. He also tells anyone who asks about her unique tail which, when she's in high gear, rotates in giant circles. He says that this rare breed was bred to chase rats out of sewers in Medivial England; the circular movement enabled the dogs to drive out the rats.

Mike is so serious and straightforward with this explanation that many people not only believe him,they go home to read more, only to find that they can't seem to locate the source of such lore.

Ivy DOES have some terrier in the mix and her face and whiskers can reach the droopy stage where a trim is essential.

So off to the salon. Zach drove back at 5:30 and voila! The Princess emerged, bandana...um cape..in place.

According to Z, others in the outer office applauded her. I'm sure she looked around for treats.

NB: The Princess has been enjoying Waaaaaaaaaaaay too much rich food. She's porking out and when we last saw the Vet, HE was displeased. As she has some hip problems, the mom of this house has now put her foot down about feeding from the table. The only thing that worked, because all of you would feed Ivy if you looked into those eyes, is my reminder that dogs sometimes have to be put down for hip problems.

So, right now, my men are minding me in this area. And look at the Princess! 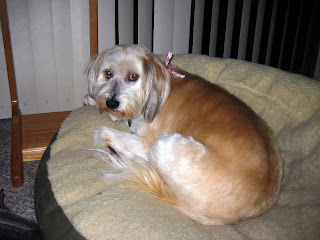 She DOES know who has effectivly dried up her extra food source so she does not smile at me. I can live with that.
Posted by BolingersCottage at 3:49 PM