THE BRICK and Shameless Name-dropping 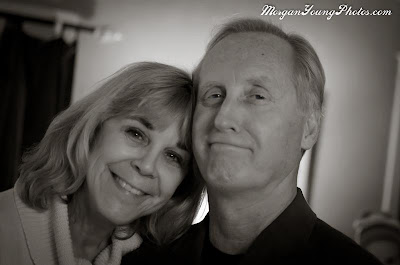 So, Friday night we drove over to Morgan and Sandra Young's home for The BRICK. Check out http://www.thebrick.com/ and wallow in envy.

Anyway, Morgan, the ever affable host, was snapping away so I'll share these photos. (We look better in black and white...vintage skin tones, you know.

It was great to run into my buddy, Erin Shultz, who is the entertainment editor at The Kokomo Tribune. She is skilled at scoping out 'What's Happenin' ' in our little town. She makes it ALL sound exciting.

She's also witty, fearless, and a Believer. We e-mail and text but our lives haven't crossed physically for awhile. She got to The Brick and we had ourselves a face-to-face time.

And here is her guy. He swooped in with ingredients for a specialty pizza.

No matter: icky. I just KNOW it. Have I tried it? No, like sushi, I just know it will taste ICKY. (Don't tell me about California rolls, thank you.)

Now HERE'S some REAL PIZZA, homemade and fresh from the oven.

I don't know which 'one' this is but all of Sandra's non-vegan pizzas are YUM!

Ok ok. Who's that guy over there, chomping on the vegan pizza? The one who pushed the chef aside and helped himself?

Hmmmm. That would be the hub. He likes it. He also does NOT like too much PDA.

Posted by BolingersCottage at 1:51 PM