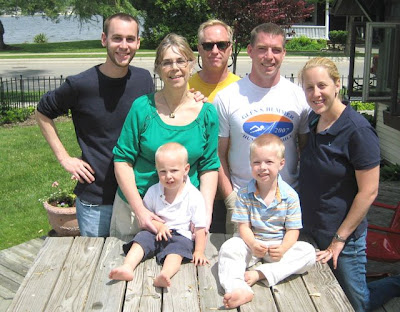 We took this photo on Memorial Day 2008. Life was simpler a year ago. One never knows what's in store.

Shortly after, daughter Allyson relocated to San Antonio to begin her internship in the Army. Son-in-law Jeremy, in white T-shirt, remained behind to work with Pioneer Seed for the summer. Those cute cute cute little boys are Noah and Drew. Mike and Lynne are in the middle and son Zack is at the far left.

Zack has been on his own in Indianapolis for several years. We never wanted to pressure him but with Mike's illness, his presence here became more than a blessing. As he is currenly unattached, we discussed the possiblity of him moving home for a while. He shared with me that he wanted to spend more time with his dad (and me) and that it's hard to get that done where he was.

So today, Zack moved home. We have a large house...four bathrooms, many nooks, so I'm hoping we don't trip all over each other. But, on many levels, having our son here will be very helpful for us.

We will travel to San Antonio soon and Mike will get to spend some quality, one-on-one time with Allyson. She, however, can't just take up and leave..the Army, you know.

In a few weeks, Jeremy and the boys will be back in Indiana. Oh, that son-in-law! He had a professional opportunity in the field that he loves. He chose, instead, to do another summer with Pioneer Seed because it will bring him closer to Mike. Perhaps they'll take in a baseball game.

They will all stay here, also, so our home will again be fun and full.
Posted by BolingersCottage at 7:37 PM