Once again, the weather was spectacular at the Lake. We had multiple days of breezy 85 degree sunshine; friends roamed the island, dropping by here and there for a chat and some refreshment.

Several local communities celebrate big with parades and remembrances and it’s not too hard to think on the sacrifices of brave men and women, now and in the past, who gave us the liberty in which we rest.

A Cocktail Class Runabout, constructed in the woodshop during the month of May. Where some in this area concern themselves with race cars, we’re all about ships here.

She’s a beauty, only 8 feet long. A ‘single-seater,’ she has no seat. The helmsman perches on his knees and if he wants to level out, he must l-e-a-n over the steering wheel. It features separate steering, transmission, and throttle controls 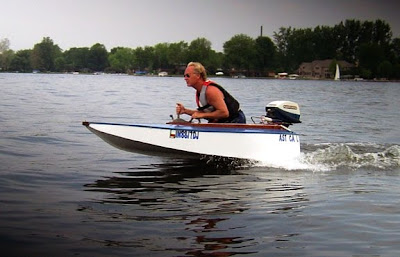 A casual observer mentioned that it reminded him of ‘those toy boats that kids ride in at amusement parks.” No matter. Mike hatched this idea while perusing Wooden Boat Magazine where he saw the plans. He sent for them and they arrived the next day. With them came folded templates: he was in business.

The ship is constructed from marine-grade mahogany plywood with mahogany trim. In the weeks as it took shape, Mike became obsessed with finding the correct engine: he knew his little ship needed a pre-1976, 6 hp. Evinrude outboard, making it legal to race. How hard could THAT be to find? 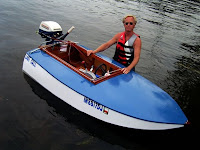 Quite a challenge, as it turns out: Ebay, on-line engine sites, boat trader sites, boat shops, junk yards. Even next door buddy Mike, who has an amazingly deep workshop. No luck. And when you make up your mind it MUST be something, each dead end frustrates.

He finally located his perfect engine in an old farmer’s shed (both the farmer and the shed) in Mexico, Indiana. After a thorough cleaning and tuning, the engine was attached and ready to go.
News ITEM:

Cocktail Class Runabout was launched by
Michael Bolinger on Winona Lake, 30 May 2010. On its
first test run, it ran 15.6 mph, measured by an onboard GPS. On its
second run, it hit 17.6 mph. With a little tweaking it is now running
18.4 mph. (The race crew, consisting of Lisa, Caleb, Kimber, Joclyn, Jim, Brian, Isaac, and Meghan, is shooting for 20 mph.)

Last Call was constructed from flawless plans and a jig, and with frames purchased through information in the March/April 2010 issue of Wooden Boat Magazine. “All members of my family who were present at the time of launching have driven the boat,” said the Captain. “It is loads of fun, particularly when you try to turn it. It tends to hop, skip, and jump.

I love it.”
On to the next project, says the hub.
Posted by BolingersCottage at 1:17 PM