The Chicken or the Dog?

One of the few things that I found entertaining in the practice of law was the improbable stories that my clients told me from time to time. Early in my practice, not knowing any better, I would sometimes suggest that they were lying to me, which they almost always denied. Oftentimes the stories were so far-fetched that I was positive they were lying to me. And frequently, they WERE lying to me. However, as my experience grew, I began to be aware that most of the time they were not lying to me at all. I just did not have in my possession all of the pertinent facts.
Frequently, if I just knew all of the facts, what they were telling me made perfect sense. Getting all of the facts was always the trick. Courtrooms are often the venue where all of the facts finally come home to roost, usually to the consternation of one of the parties. Sometimes in ones personal life strange occurrences take place which make no sense at first, but become perfectly understandable later on when all the facts show up.
Last week I turned in the driveway to find my neighbor and her daughter knocking on my back door. After I parked the truck, I said hello and asked them what they wanted. My neighbor is Chinese and has not lived in this country long enough to learn English. She began to speak to me directly and forcefully in a strange mixture of unintelligible English mixed with what I assume to be Chinese. Although I could not understand most of what she was saying, I was startled to when her 6-year-old daughter also start yelling at me in a similarly confused combination of the two languages. Try as I might, I could not understand what they were talking about; it was clear that they were both very upset about something. I wanted to understand what they were saying to me, since it was clearly important to them, but all I could get out of their speech was what I thought were two words: "dog" and "yard." That's it. They abruptly turned and went back to their house, apparently satisfied they had spoken their minds, or irritated that their ignorant American neighbor couldn't understand what they were so plainly telling him. I shrugged as they left and did not give it much more thought.
When I entered my house and walked into the bedroom, I was greeted by the finest dog in the world, Iverson, who was happy to see me. There she was on the carpet with a bird-like creature between her two front paws. "What have you got?" I asked. Iverson just looked at me. Upon closer inspection the very dead creature looked like a large, dead baby bird of some kind. I thought maybe a duck or goose. I grabbed it away from Iverson, wrapped it in a paper towel and put the corpse in the trash can. There wasn't much else to do for the now deceased. I told my wife that Iverson had scored a great victory in bringing down some sort of wild bird and that she probably was not hungry.
A few days later I commented to the lady next door, one who has her finger on the pulse of the neighborhood, that I thought the Chinese woman and her daughter were upset with me. I told my neighbor that it had something to do with "dog" and "yard," but I couldn't figure out any more. The neighbor said she hadn't heard anything yet, but would let me know if something came up.
She then proceeded to tell me that the Chinese lady and her daughter came outside every evening to sit on their patio in the back of their house and that she would try to find out what was upsetting them. I said that maybe Iverson was bothering them since Iverson wanders around the neighborhood when I am working in my shop or garage. My neighbor then said she always told Iverson to go home when the Chinese lady and her daughter were on their back porch. I asked if Iverson was being aggressive or barking at them. She said she told Iverson to go home because the evening was when the Chinese lady and her daughter let their clutch of chicks out of the house.
"They are raising chickens in their house?" I asked.
"Yes, they were little chicks at first, but now they are getting pretty big and have feathers," she said. "The woman and her daughter sit out there in the evening and let the chickens run around the yard."
"Oh crap!" I said. "That explains it! Iverson picked off a pet clucker. That is what they were mad about the other day. Iverson got some fresh chicken tenders off the neighbors. Probably didn't pay for it either."
And so there you have it. The mystery of the Chinese neighbors' irritation was solved. The origin of the bird corpse species solved. All things are now clear. I am supposed to keep my wretched dog out of their yard so that they can raise their illegal farm animals inside their house inside the city limits. My neighbor opined that it will be interesting to see which animal ends up in the soup first: the chicken or the dog.
In parting, contemplate the picture below. Does this look like the face of a stone-cold clucker killer? I mean really, is that the face of a cold-blooded chick assassin? I think not. 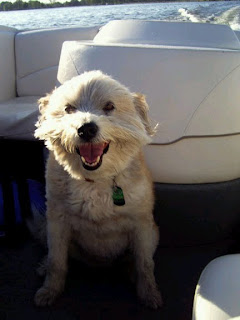 P.S. Iverson advises that she prefers her hens extra crispy, just like the Colonel makes, but General Tsao's spicy chicken as served at the Great Wall is also excellent.
Posted by BolingersCottage at 9:47 PM