Cruising, on a Friday Afternoon (and Sat. and Sun. and)

About 15 years ago, Mike took Zach on a trip to the Grand Canyon, Sedona and other Arizona locals.
Neither had visited The Great Hole and it IS something to experience live. Most of us have seen really good photos but there’s just something about standing on the edge and letting its grandeur take your breath away. Really.
They drove along the southern rim until they came to a park sign: “Scenic Vista.” They parked the car and walked a few dozen feet to a rail where they could look out (10 miles) and down (at least 1 mile) and marvel at this magnificent work of nature.
Catching their collective breaths, they returned to the car, pulled out of that parking lot and drove on about 2 miles until they saw “Scenic Vista.”
They repeated the drill.
Then again.
Then again.
As neither wanted to cut into the other’s adventure, they spoke not much except to say that, wow, this was something to see.
But the drill began to wear and Zach, the younger, finally said, “Dad. Have you seen enough?”
“Well, yes, about an hour ago.”
“Then please,” he pleaded. "NO MORE SCENIC VISTAS!”
It is amazing how quickly the wonder becomes blasé: yet another place to look out and down.
Mike made a return trip, this time with Allyson and two college friends. Modern women all, they were a lot less tactful. At the second vista, they announced that they had seen enough and longed to return to the resort and the hot tub.
So we have a family joke that we all use on occasion, code for “I’ve had enough.” It doesn’t usually involved sightseeing. “PLEEEEEEEEEEEEEEASE. No more scenic vistaaaaaaaaaaaaaaaaas!” 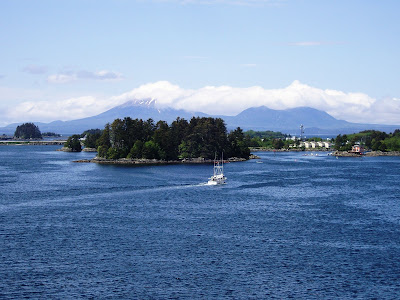 Ah, but in Alaska, it’s all about scenic vistas, constantly changing as we sailed by. We seemed to come in close to mountains that towered over us, iced with snow and dotted with wildlife. And we could not grow weary with that sense of our own insignificance surrounded by the glories of God’s nature and handiwork.
As for our pre-cruise planning, it was a good call to get a room with a veranda. There were many opportunities to sit and gaze, silently and undisturbed, as is much of the scenery. Then, when we could leave the ship, ports permitted deeper exploration. 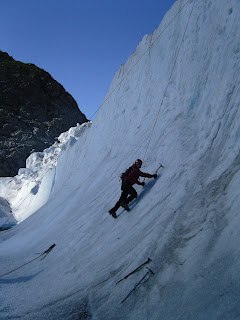 In Juneau, the capital, Mike climbed on a helicopter and flew to one side of the Mendenhall Glacier. There, with training and guides, he and his fellow adventurers donned bright red gear and crampons, laced belay lines up and around themselves, grabbed ice picks and scaled the side of the ice.

Slightly less adventurous and fit, I slid into another helicopter with four other ladies and our guide. We lifted off and flew to another site, spying Mike’s group as tiny little matchsticks on the ground. Their bright orange tent looked like a gumdrop.

We got out and walked over the glacier. Our guide provided lots of information such as “Watch where you step. The first 100 feet of ice is soft and looks like Swiss cheese. Lots of holes.”
We came to a glacial stream, ice cold and aqua blue. “There is no vegetation or wildlife up here and you’ll find this the cleanest water in the world,” he said. He encouraged us to lie on our bellies and drink ‘Alaska style’ from the rushing water. (Do they laugh at the tourists?)
It WAS good.
Juneau, whose high school just graduated 378 students, has 7 miles of paved roads through town but you cannot get anywhere else unless you have a boat or a plane. The roads just end. One of our guides told me I reminded her of her English teacher so I told her what I do for a living. (English teachers all look alike. :0)
Our week in Alaska was full of adventure. Each port, as the cruise shopping director is quick to inform you, affords lots of opportunities to shop. He’ll even tell you WHERE to shop and what you should buy. As we are not big shoppers anyway, we opted for personal sightseei 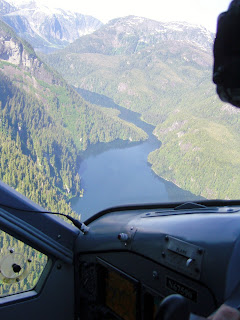 ng, strolls through curvy streets.
In Sitka, Mike donned a dry suit and went snorkeling. In Ketchikan, we both traveled by float plane over and into the Misty Fjords National Monument. Our pilot was especially juiced (figuratively) as the day offered unlimited visibility; we were able to fly up and over the mountains where you could see until the horizon blurred. We swooped down and landed on one of the high mountain lakes nestled between dense forest hills and then flew over others.

On another day, we coasted through the Hubbard Glacier National Park; we were under instruction to turn off all loud music and tone down on-board noise as we floated along, so as to not disturb the wildlife. 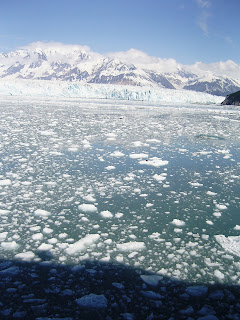 Every so often, you’d hear what sounded like thunder, look up and see the glacier calf, crashing into the water, just like you may have seen on TV, only live. Never got bored with that sight.

Overhead, eagles and hawks coasted, dipped down and then rose again. Down below, otters and sea lions slipped in and out of the water.

Later, we turned around slowly, coasted out and then motored ahead.

When most people tell you about cruises, they keep coming back to the food. It IS plentiful and very good. It is usually ‘plated,’ arranged artfully and served with elegance. And between meals there are constant opportunities to ‘tide yourself over’ lest you become hungry. We enjoyed our meals but this was not a big attraction for either of us.
We got to spend 8 days together, sharing a first-time experience as we traveled through the lower part of Alaska. 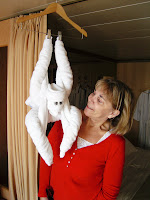 Mike was absolutely charmed by the towel animals created by our cabin steward. He insisted on capturing each on film before I dissembled them.
Really.
He took his travel guitar up to The Crow’s Nest, the lounge at the top and the bow of the ship. Usually, he reported, that he was all alone. My suggestion that he put out a cup for tips…..he says he did not.
So many friends asked us about the cruise and we told them much of what I’ve related above. Now if you catch the hub in a mood, he’ll tell you that ‘cruises are for women;’ he will play the part to the hilt that he did this for me and that it was a sacrifice.
What he doesn't say is what he whispered to me at the close of the trip.
“You know, we didn’t see a whale.”
“We didn’t sign up for that trip,” I reminded him.
“I know. I guess we’ll have to go back.”
Posted by BolingersCottage at 8:34 PM