Only for Rabid Fans

This entry is for the fans. It is a short trip through the first years of the Mike and Lynne Bolinger Corporation. We figure that no level of fame will generate an autobiography for either of us, which is really fine because, among other things, who needs all that press coverage? Photos that catch a bad angle? Strangers calling out to us, using our first names?

But you, our readers, are not strangers. You are our brothers and sisters, by blood and by bond. You’ve been walking with us through a monumental adventure. You know, (don’t you?) how much we covet your prayers and crave your concern.

We will mark our 36th wedding anniversary in a few weeks. We’ve never been big celebrants of such milestones…for many years, June 8 came smack in the middle of final exams where I was elbow deep in paperwork so it was “Hey, Happy Anniversary” and “Yeah, you too.” Hate to ruin any romantic notions you’ve been fostering but the truth is the truth.


I do recall that last year, we made a point to celebrate, for all sorts of reasons, not the least of which was we figured it was the last one. We traveled to San Antonio, even as Mike was feeling ill, to spent time with our daughter and her boys. Mike and Allyson had time to go off together for a father/daughter chat and I remember noting that it was so good of God to give us THAT time to tie up loose ends.

And here we are, a year later, getting ready to celebrate again. Isn’t God good? And as that terms doesn’t come close, is there one that does?

Shortly after June 8, 1974, Mike began his three-year stint at IU School of Law. 5 days a week, he’s jump into our 1970 white Volkswagen and drive 50 miles for class. I would hike over to the high school, a mere ½ mile from our apartment. I would get home around 3 and do the little new wifely thing, trying to prepare a meal and setting out a pretty table.

Mike usually arrived at 4:30, tired and spent, his head pounding inside and out from the day and the drive. We’d sit for our little dinner and then he would retreat to the spare bedroom where he would study all evening. I would do my schoolwork, some light cleaning, and watch all sorts of bad TV movies. For the youngsters out there, there were only a five stations to choose from.
Mostly I saw the back of Mike’s head. That December, we drove to Michigan to share Christmas with my parents.


As Indiana law required teachers to obtain their Masters Degree within 5 years, it seemed like a good plan to begin that goal so during Mike’s second year of school, I attended Ball State University two nights a week. We would team drive, he still putting 500 miles a week and me adding 240 to the Bug’s odometer.
Our apartment morphed into a dorm with a study room. Our dining room table no longer had room for actual dining; it was piled with books, typewriters (google that), notebooks

We were also living within our means which meant that we had become budget fanatics. That meant that I went to the grocery store with cash in hand and had to make it stretch, sometimes putting items back or replacing with something cheaper. Saturdays became the day I would make something that could be eaten all week, like mac and cheese or chili; I’d divide it into plastic containers and freeze them so either of us could give it a microwave blast and have something to eat.

We did have money for haircuts but

Even though we’ve weathered 36 years, we aren’t in the business of offering advice or handing out wisdom on how to stay married. We know that we had volumes of prayer offered up in our behalf. But we did land on one little trick that saved us a lot of grief.

I began to notice that on quite a few Fridays, I would get ready for school looking at swollen eyes from the crying the night before. It took a lot of brown eye shadow to camouflage the puffy eyelids. When I realized that I was going through eye shadow at a faster rate than normal, I started to attempt to analyze what was going on.

On a calm Saturday afternoon, we sat down and had one of those team-building chats that I’m betting all still-married people have had. We figured out that by Thursday nights, we were both so tired that it took almost nothing to set one or both of us off. And then would come the fight, with all of its irrationality, and he would shut down and I would cry and we’d both go off to our corners.

So, on that afternoon, we took a pledge, a new one, that if either of us ever thought that our discussion was headed for a fight rather than a calm discussion, that one could utter the magic words:

“It’s Thursday.” That was code for ‘stop talking.’ I didn’t keep count but I’m pretty sure he got to say the words more often than I did. 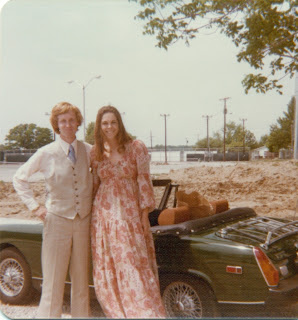 And then, summer of 1977, we cut our hair and became grownups.
Three years later, God blessed us with our daughter Allyson. Another three years, another kind of blessing in the form of her brother Zach.
And that’s what you can call
Mike and Lynne, the early years.
Posted by BolingersCottage at 3:07 PM