The hub has been a voracious reader most of his life. Much of his leisure choices run contrary to anything I might be interested in. We maintain separate sides on family bookshelves and wander different paths when we stop at our local book store.

He devours those spy-counter-spy-counter-counter-spy thrillers where, at least, I would need a flow chart to keep the plot straight. And when it comes to non-fiction, he loves the strategy of war and so is conversant with details and minutia of WWI to the present, the large and the small battles, victories, and various players. Captain, general, private, flying ace.

Give me a well-written, character-driven piece of fiction any day of the week.

Mike’s reading enjoyment ramps up when he can summarize it to the most convenient ears. Those would be mine. As a trial attorney, he has milked the pregnant pause in the courtroom for effect. As a literature critique however, his timing is a bit off. “And then, just as the message is set to be sent to wa wa wa waaaaaa wa wa” Sometimes, even as I try to attempt to follow, the eyelids fail.

A child of the King, he has also read through the Bible several times in the last few years. His thirst for understanding God grew when he believed he’d be summoned into that throne room soon.

When we returned from the hospital last April, a close friend commented that he figured Mike would go deeper into his spiritual nature and, as a side observer, I’d say that’s the truth. He began with Chuck Swindoll’s Jesus, in his Great People of the Bible series. Within a month, he had read through all 8 books and reread the relevant portions of scripture. And shared it with me. “Did you know that the word “God” does not appear in Esther?” Trust me (and Chuck). He also sent Swindoll a letter and received a personal reply.

We’ve both read Randy Alcorn’s Heaven and Why Do Bad Things Happen to Good People? And of course, we reread Basic Christianity by John Stott and Mere Christianity by Wheaton favorite C.S. Lewis. 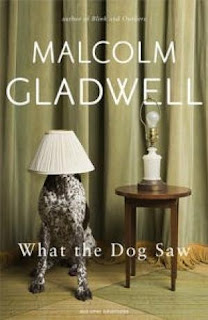 How, then, did he happen upon What the Dog Saw: And Other Adventures by Malcomb Gladwell? He picked it up during one of his frequent stops at our local library. I’m betting the title grabbed him as he holds to the belief that dogs are smart, insightful, intuitive, and loyal. Our dog, all of this I’m sure, is also quite spoiled as she gets to ride shotgun on errands about town.

When Mike’s dark cherry-hued Silverado pulls up to the Wendy’s Window, the staff knows: Ivy gets her own order of fries and a cheeseburger, something our vet, Dr. Bob, would frown upon and something the hub disputes with mock surprise. How could anyone even THINK that he would feed her such stuff? Evidence is heavy to the contrary of his assertions: why is it, I ask, that whenever we sit for dinner, Ivy dashes from wherever she may be to sit, alert and intense, to his side, chin turned up with expectation and eyes fixed upon utensils?

The veterinarian people, by the way, have lectured me on her weight; they chastised Zach when she nipped the vet’s fingers as he offered her a snack. “Typical of dogs who are fed from a fork,” he sniffed.

This year, as Mike has more free time than the rest of us, I let HIM take Ivy for her annual veterinary appointment, content that they would roll their eyes at the doggie scale and observe the fork behavior, and lecture HIM. He reported that this did not happen, that they said the dog was ‘slightly overweight and certainly looked healthy.’

At least the forked tongue is still in place.

At any rate, Mike and Ivy have become even faster friends and a book title that seemed to elevate canines to a new level would make good reading. I’m pretty sure that’s how the thought patterns fired.

Gladwell writes for The New Yorker Magazine and this book was a compilation of former articles. The Dog Saw in the title comes from a piece about The Dog Whisperer, who had a program on television. This man claims that he can manage any dog’s behavior through subtle, observable movement. We learned (remember, I get this second hand) about how dogs interpret human leaning as a signal for play or attack. It is good to know the difference. Mike tried it on Ivy and proclaimed The Dog Whisperer a genius.

The hub also got sucked in by the author’s engaging style. Gladwell, an Indiana University graduate, possesses a gift for inquiring -- did you ever wonder why? – and then seeking out the answer.

It was chapter 2 that signaled a change in my life.

“Have you ever heard of Ron Popeil?” the hub asked one afternoon, shaking his head and chuckling through Gladwell’s prose.

“Well, sure,” was my honest answer.

One of the joys of the journey is that even 40 years after we met, we continue to learn new things about each other.

Mike had read Gladwell’s chapter about Popeil, the son of the inventor of the Veg-a-matic, and the face of numerous infommercials, most which aired before QVC hit the tube. Some of his stuff is junk; some not so bad. I, myself, have owned the Popeil Pasta Maker...you may remember the pitch, “It makes chocolate pasta.” Intriguing.

Mike was clearly amazed that I knew who Ron Popeil is; I was amazed that ANYONE did NOT know who he is.

Gladwell’s biographical chapter draws a rich portrait of a born salesman, a youngster so attractive that his father set him up at the downtown Chicago Woolworth where Ron demonstrated the chopping of vegetables to working ladies during their lunch hour. He chopped his way through tons of produce while grinning and selling. He sold and sold and sold, the Veg-a-matic and his charm. His display desk was his stage and his groupies, in sensible shoes, swarmed like he was a rock star.

His successes continued and continue into this century.

Evidence: on our kitchen counter sits our Platinum Edition Ron Popeil Rotisserie, still gleaming and still in use. We gather, or at least walk by, the whirling heated oven as chicken, or roast beef, or pork roast, or steaks rotate, cook, brown, and fill the house with irresistible aromas. (see blog: February 14, 2010)

So how did Malcomb change my life? In this year of changes, that’s quite a claim, but it is accurate.

As we faced the Biggest News, that diagnosis of Stage 4 gall bladder cancer, we drew each other close, arms around each other. For a while, the hub and I shut down our interest in the world outside our embrace. Nothing else mattered. We had a clear idea only that God was in control, that He had a plan for us, and that He would walk us through it. The banter of television, especially news and politics, went on mute. The daily newspapers seemed filled with irrelevance.

Slowly, we’ve emerged from that cocoon to rediscover what else is going on. Just yesterday, Mike went on a tirade about the upcoming election: we have decided to vote against any and all incumbents. Imagine what would happen if there were NO senior politicians and everybody had to travel the learning curve? We dream.

And Malcomb has nudged Mike into the fascinating study of events in the present, of the intricate, sometimes arbitrary appearance of people and events that turn the world on its side.

Mike’s audience is more in tune with his summaries; in fact I have plowed through a few Gladwell chapters myself. I’m conversant with the Rule of 10,000, the 80/20 Principle, and Mavens vs. Connectors. Tease?

So, thanks, Malcomb, from here in the Midwest, where we are very much alive and living.
Posted by BolingersCottage at 3:27 PM