We’ve just passed Presidents’ Day 2010 and as, these days, I’m marching to the school calendar drummer, I note that last year, right after I returned from THAT long weekend and the hugging of babies in San Antonio, Mike and I began our great adventure.

It was that Wednesday night that Mike nudged me and said that his chest hurt and that we should go to the hospital. And even though he has well-controlled blood pressure, his age and stress level would make him a candidate for a heart attack so we bundled up and I drove him several blocks to the emergency room.

A long night and then another long night as we began to hear troubling health news: Heart was fine. Blood chemistry was fine. But there was “something strange” going on with his gall bladder and, wow! Look at that kidney stone!

The next month brought tests, procedures, exploratory pokes and prods, each with promising news until a surgeon yanked out that gall bladder. “Strange” became a 4 cm cancerous tumor. The final, and brutal, surgery was to see if the tumor was contained, if this was that one that they had caught early.

We held hands, prayed and joined with friends as we stepped on this path. Early news from surgery was hopeful and then the doctor found what he hoped he would not…that the tumor had spread and was found…I will remember this forever….”significant distance from the primary site.” He gently said that there was no benefit from going further, that is would “do no good.”

So commenced a journey for us, one that we believed would be short.
Realizing that as pastors say, “God’s time is not our time,” we are celebrating every day, even today when the weather is so cold and snowy.

Early on, we asked God to answer the big question – Why? Why us? Why now? Why this? Is it any surprise that we have no answer? Does that shake out faith and our love for our Father? No. We have learned to lean hard into the arms of the one who created us and we walk this path every day, blessed with each sunrise.

Is it wrong, is it sin, to ask God that question?

No. He created us. He gave us our searching nature.

Then why, when we ask, when we prayerfully ask the Father to explain it to us, why does He not give us this request?

News Flash: We do not have the mind of God. When we ask Him to explain it to us, He may say gently, “You cannot understand the answer.”

What we know here, and truly, God gave us this assurance from the beginning, He has the Master Plan. Everything that happens, that doesn’t happen, all of it, is a part of that plan.

I mean, what answer would make sense:

What could God say or show us that would explain the plan? We cannot comprehend. We have to trust Him. And those of us who know Him, who have walked with Him, can rest in what we know of His nature and His love.

But here’s the cool part: as we have traveled this path this year, God has permitted us to peek at small parts of His plan. Tiny parts. Slivers, really. This has come about long after we stopped asking “Why.”

We no longer seek the answer. We are humbled to know, really know, that we have a part in the plan.

We can make our lists, set our agendas, record our plans, and we do. But the Father has us in His hands, within His plan. Sometimes OURS doesn’t match with His. And His is best. Period.

I had plans to travel back to San Antonio last weekend. Just as I was getting ready to check in, I got a call from the airlines. They had canceled my flight to address the clogged airports on the East Coast.

Really? But what about my plans?

So, Saturday morning, when I had planned to be strolling around south Texas in my shorts, I met up with lots of volunteers at the Kokomo Rescue Mission to ‘Walk a Mile’ to support their shelter for homeless women and children.

The Rescue Mission has a special place in our family’s heart and this annual event is the primary fund raiser for the shelter. I had turned in my pledge money. I told my buddies that I would not be at the walk.

But, plans change. I and my men took part. Mike ran the course. Zach, fresh from a warm bed, strolled with me. This was the plan for Saturday morning. 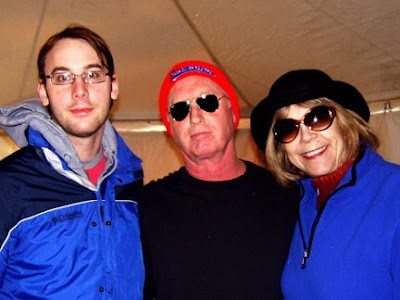 Posted by BolingersCottage at 9:24 PM