My dad was the executive officer of the Sky Giants, a Navy Reserve fighter squadron based at Glenview Navy Base, which is about ten miles up the shoreline from the Chicago Loop on Lake Michigan. The base was leftover from when naval aviators were being trained to land on an aircraft carrier that had been sailed down the St. Lawrence Seaway into the lake during World War II.

The Sky Giant's aviators had been assigned to fly their beloved F8F Bearcat. It was a fighter built around its enormously powerful radial engine. The engine cranked out 3000 horsepower. The aircraft looked kind of stubby sitting on the ground. The wingspan wasn't all that wide and the fuselage sat on an incredibly stout-looking landing gear. The canopy was a glass bubble, providing perfect 360 degree visibility. It had a roomy cockpit and was as reliable as a stone. Its roll rate was instantaneous. It could out-turn anything in the air. You couldn't break it, and it never broke. The airplane wasn't pretty, but it excelled at what it was designed to do --- dogfight with enemy fighters. In short, it wasn't much to look at, but it was an animal in the air. It was the fastest single-engine fighter in the world. 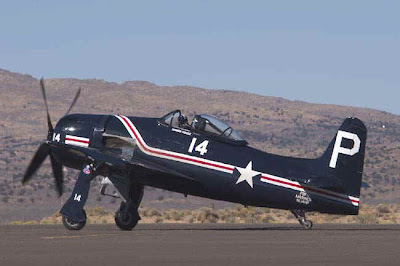 Takeoff was tricky in a Bearcat. The radial engine was swinging the largest four-bladed propeller ever put on a fighter. If you gave the engine full throttle on the takeoff roll, the torque from the motor would snap-roll the aircraft 360 degrees as soon as the weight came off the landing gear. That could ruin your day. Even with this treacherous tendency, the naval aviators that got to fly it loved it without limit.

Now I know that some persons reading this piece will say that the P-51 Mustang of WW2fame was the better fighter. They are wrong. I have it on good authority that my dad met up with a Mustang driver based out of Evansville one Reserve weekend and they proceeded to do a little off-the-record air combat maneuvering. Dad said he could out-turn, out climb, out dive, and out run the Mustang. He even said it was easy. But then again, he said the outcome might have been different, if a naval aviator had been flying the Mustang, as opposed to an Air Farce pilot. But I digress. 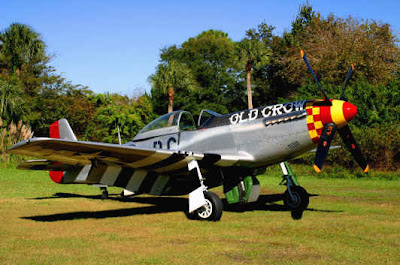 Unfortunately, the powers that be decided that the Sky Giants had to trade in their treasured Bearcats for the Navy's first generation jet fighter, the Banshee --- an aircraft with an unreliable engine, a hopeless electrical system and a hydraulic system that sometimes just didn't show up for work, or, as Dad used to say "went home early." The squadron aviators were not happy about the change.

The weekend for the transition from the Bearcat to the Banshee came to pass and three Banshees were flown in by the instructor pilots. The three aircraft were sitting on the ramp outside the control tower, so that the fliers could look them over. As is always the case, the instructors immediately began taunting the new guys about how difficult flying the new airplane was and that it was not likely that any of the new guys had the right stuff to survive the check ride. Hair-raising tales of in-flight emergencies, engines flaming out, controls going to mush, and, worst of all, mysterious, undetermined mechanical noises coming from the plane during flight, were the order of the day, along with entire over production of testosterone.

All of the aviators gathered in the ready room at 0700 on Saturday morning to hear the orientation lecture by the instructors. The lecture lasted less than one hour. There was no textbook, no manual, no performance charts, and no emergency procedures outlined for the new guys. In fact, the only useful information given were the airspeeds at liftoff, downwind, gear down, flaps down, and short final over the fence. After the useless lecture, all the pilots went out to the ramp to sit in the plane.

One by one, the aviators each slid into the cockpit. The instructors pointed out the various controls, engine gauges, electrical switches, and warning lights. Each potential victim was allowed to sit in the plane as long as he wanted, because as soon as he was familiar with the layout, he was blindfolded and given a test: the instructor would call out a control, switch or button and the pilot had to immediately identify it by hand. Surprisingly, every pilot passed the test.

Since most Navy flights were by flights of two aircraft, each lead pilot and his wingman were grouped together. The lead pilot would strap in with the engine start procedure written on his hand ( if this technique is good enough for a naval aviator, it is fine for Sarah Palin, I think) and the wingman, who was standing on the wing to the right of the canopy, would double check the startup procedure and set the various controls, buttons and switches for takeoff. Once all was set, the engine was started and the pilot would taxi out to the runway for takeoff with the wingman still on the wing. Once in takeoff position, the flier would throttle up the engine to make sure it was making maximum power, quickly check the engine gauges and flight instruments, and then signal his wingman to get down from the wing. The pilot would close and lock the canopy and launch the plane. At least, that is how it was supposed to go.

My dad's squadron commander, who was a veteran of the carrier war in the Pacific during WW2, got in and strapped on the plane. Dad, the executive officer, stood on the wing and went through the startup procedure with him. With the engine now running, the squadron leader taxied out to the runway with Dad on the wing. All of the instruments and gauges were checked by both pilots. The engine was throttled up and seemed to be running fine with all the gauges in the green. On signal, Dad got down from the wing and ran to the side of the runway, as the squadron leader closed and locked the canopy. But, instead of launching the airplane down the runway, the leader throttled back the howling engine to idle. He motioned for Dad to get back up on the wing. He unlocked the canopy and slid it back, and taxied back to the ramp, where he braked the airplane to a stop. He then shut down the engine and climbed out.

Puzzled, Dad said, "Is something wrong with the plane?"

The commander turned and said, "No, there isn't anything wrong with the plane."

Dad said, "Did you forget something?"


The commander was silent for a moment as he looked at the sky and then said, "I fought my war. I'm going to pass on this one, Bo. I quit." The commander took off his wings and handed them to Dad, who was speechless. Dad just stood there.

As the commander walked away, he turned and said to Dad, "You are in command now. Tell the men it was an honor and privilege to have commanded them." And away he walked, never to be seen or heard from again by the pilots of the squadron.

I have often thought about this story Dad told me. Was the commander frightened of the new airplane? Probably. But all the fliers were. Dad said HE was. Was he lacking the "right stuff." Hardly. He had flown fighters off a carrier in WW2. He was a proven leader and a combat veteran. He had nothing to prove to any one.

So why did the commander walk away and resign his commission? Dad said he could only guess. I certainly don't know. Dad said he thought maybe the commander had a premonition that all of his luck had been used up.

Many years later, Dad and I were flying and this story came up as we droned on through the night. We talked about why the commander quit. As all pilots know, we would much rather be lucky than good. Sometimes things happen in the air that you just can't control or fix. It doesn't make any difference how good you are. Sometimes you have tried everything you can think of and you are at your wit's end, and Lady Luck shows up and you get to walk away. And sometimes, Lady Luck doesn't show and you are just dead. I like to think that the commander suspected or knew he had used up all of his nine lives. Maybe during the War. That would be understandable.

Life is a lot like that checkout flight. None of us knows what is going to happen to us next. The possibility of crashing and burning in some fashion is open to all of us each day. You just never know.

Would I have strapped into that Banshee and taken it up? I'd like to think so. I've always had a wild streak in me. But to be fair, my situation now is different than the commander's situation then. I know my luck has run out. I am pretty sure I've used up my allotted nine lives. I used up the last one last March.

Which is, if you think about it, even more reason to strap in and go flying.

Mike out.
Posted by BolingersCottage at 5:26 PM