I have a friend in Austin, Texas; he’s one of what my son calls ‘Mom’s little internet friends.’ No matter. Peyton has offered me really good information when I travel to San Antonio. Allyson has lived in San Antonio now for going on two years, but Peyton is a native so his knowledge runs deep.

He’s heard of Rudy’s barbecue and admits that their product is pretty good. However, he tells me that the best BBQ in the state can be found about 50 miles north, nearer to his stomping grounds. Personally, I’m no fan of barbecue anything so it’s not so tempting to make the drive.

However, when he heard that I was going to be in Texas for Christmas, he urged me to sample the absolute best tamales in the state, at a place right in San Antonio. I learned that the natives prepare and give tamales for holiday gifts, like my kin noshes on lefsa and somewhere, someone actually likes fruit cake. So I got Allyson to drive me to the place; she informed me that we had entered a rough neighborhood and that after I got the tamales, we really needed to drive elsewhere to sample them.

All good. We drove there one day at about 3, only to see a sign: All sold out. Come back tomorrow. I think we detoured to a pizza place. The next day, they were sold out by 2. Wow. It became a challenge. So on day 3, we arrived at 11 AM to see a line snaked around the bright green cinder block building, a combination convenience store, gas station and news stand.

I walked to the back of the line which quickly filled in behind me. The lady right behind was dressed as from the office, nice shoes and a skirt, and her hair was anchored into one of those no-nonsense buns. We chatted. She was from Egypt originally and was sent from her office (correct!) to get a supply of tamales for their party.

I said, “You know, I’ve never eaten a tamale in my life.”

She looked at me like I had foreign flora growing out of my ears, sizing up my age, and said, “I guess that’s possible.”

I eventually purchased some tamales and tried them out and all I can say is, pass the lefsa. Not a fan. Do not understand the big deal except they take a lot of time to make. I tasted what are apparently the best tamales in the state…..chicken, cheese….thought they might be improved with a filling of cream cheese, cinnamon and sugar.

I had a similar reaction, like the lady behind me at Tamale Town, to the hub a few weeks ago when he asked me if I’d ever heard of Ron Popeil. You know, don’t you, of Pocket Fisherman, Veg-o-Matic, Chop-o-Matic, and The Amazing Knife Offer.fame. Hasn’t everybody see Ron hawking his amazing products during his 30 minute infomercials? 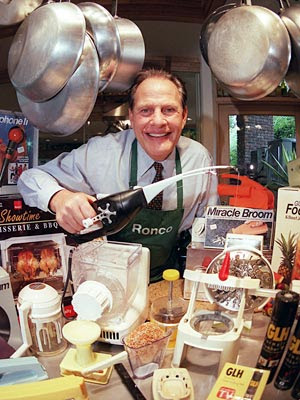 Mike said he had never heard of Ron Popeil. “I guess that’s possible,” said his spouse. Although what was Mike doing all those years when I watched Ron try to sell me stuff? I have no idea.

When we were in Fort Lauderdale, Mike read What the Dog Saw by Malcolm Gladwell. There’s an entire chapter about Ron Popeil, who rose from a teenager demonstrating his dad’s invention at Marshall Fields in Chicago, to the master pitchmen and inventor he is today.

Mike has always enjoyed stories of people who hustled and worked for success. Gladwell’s take was full of examples and quotes by both fans and detractors of Popeil. Over most meals, Mike would summarize or actually read from the book.

According to Gladwell, Ron invented the pitch technique of the countdown. You remember:

Just as I was amazed that he had never heard of Ron Popeil, he was equally amazed that I had. We just keep learning about each other, even after all these years. It’s this kind of discovery that keeps a marriage fresh, I guess.

But speaking of freshness, I had planned to be back in San Antonio this weekend, hugging grandbabies and all. After telling me that this was a great idea, the hub then hit me with, “But you’ll be away for Valentine’s Day.”

And a Frowny face.

Fake Frowny face. We NEVER do Valentine’s Day. That’s not to say that we don’t celebrate our marriage, our love, our lives. We just don’t cowtow to Hallmark, Whitmans’ and Flowers.com.

I happen to have a spouse who surprises me with gifts on a semi regular basis, for nothing in particular, just because, or just for nothing other than he wants to. Certain local sales clerks in select departments see him coming and pounce upon him.

Go ahead, ladies. ENVY me.

And gentlemen: take a page from Mike’s book.

And as for my gifts: he tells me I am a continual source of joy for him. I challenge his premises; I listen and respond. I make him think (sometimes) and laugh (often.)

So my being gone on a certain day would not be such a big deal. I knew this and so made my reservations.

Then, there was all that snow that buried the East Coast. We in the Midwest, if we noticed at all, were chuckling that it was THEM not us.

One should never enjoy someone else’s inconveniences; I know this and it got reinforced when the airline called to tell me that my flight was canceled as were many other flights as the airlines tried to clean out the East Coast clog.

SO, I was going to be home for V Day after all.

I HAD purchased a gift and had planned to drag it out when I got back. Change in plans. I crept off to the guest bedroom where it was hidden. I opened the packaging. I took it out and brought it down to the kitchen.

And there it is: Ron Popeil’s Amazing Showtime Rotisserie, Platinum Edition. All sparkly and shiny in its not-really-platinum beauty. I watched the video and assembled the loose pieces.

After church today, I had Mike sit and watch the video (there are a lot of warnings….somebody probably got sued) and right now, we have a whole chicken, property cleaned, rubbed, seasoned and loaded, turning around and around in our new appliance.

So Happy Valentine’s Day to you. I’m having chicken for dinner.
Posted by BolingersCottage at 2:21 PM