So We Took a Trip

Followers of this blog may begin to sense the logistical/social/emotional/geographical/financial/ itinerarial (parallelism) challenges that these Bolingers faced in the planning and execution.

The hub expressed some concerns about venturing outside the good ol’ US with its superior medical care. I mean, we’ve been to some places where the national hospital is a double-wide trailer. And with ‘no money coming in,’ he hoped that we would not burn through our retirement accounts. Then there were discussions about places to go; how we’d get there; how long it would take to get there; what we would do when we got there; how long we’d stay and where; and what about the dog?

For a retiree and an on-leave teacher, our September calendar is surprising cluttered, but I scoped out a stretch where a trip could happen. We settled on Gettysburg, 9 hours away by car. This would be Mike’s third and my second trip. We brought along Zach who was making his first tour of the battlefield. Mike suggested that he read The Killer Angels in preparation.

We could drive it in one day. We could stay at a nice chain hotel where I’m accumulating points. We could spend an entire day walking, climbing, and viewing this historical acreage. We could drive back to Kokomo, again in one day. Mike began to warm to the idea but, of course, wanted details. More than what’s stated above.

As I prepared the Google directions, I realized that our route, I-70, would take us within 20 miles of Shanksville, PA, where Flight 93 crashed on 9/11. Ok, how could you come so close and NOT stop? You couldn’t. I announced that our itinerary would include this stop. That would be 7 hours into our initial trip. Yes, we would have to venture off the Interstate but I assured them we would be ok. Then we would continue on to Gettysburg, get a good night’s sleep, and then tour the battlefield. As that would take most of the day, we would stay again at our hotel.

Then, I saw an item in USA Today about Hershey, PA. “Hmmm,” wonder I. “Where is Hershey in relation to Gettysburg?”

Could you really be THAT close to Hershey and not stop? Isn’t that one of those places that most people want to visit? No and yes. So I injected the new idea at dinner.

This is where the recitation began about my forcing the family to view The World’s Largest Peanut Boil. (former post) “Is this another tourist thing? I hate tourist traps,” said the hub.

Hate? Strong. I’m all for reserving hate for the truly evil. (make your own list) So we discussed the nature of tourist traps.

I have a friend who owns a unique gift shop on Winona Lake. She travels to Chicago and New York to stock her store. I asked her, “Is there a place where you can just buy tourist junk? You know, shot glasses and little silver spoons?” She says that yes there is. She never shops at such places. At touristy places, the gift shop will be filled with this junk.

I assured my men that they would enjoy this trip and we didn’t even have to venture into any gift shop. A bit of grumbling and then assent.

I also assured them both that I had directions and maps. I had mileage and time estimates. Really, they should just relax and not worry.

Enough already about Ivy. She was the guest of the Young family whose canine welcomed her to the fold.

“And we’re NOT stopping,” announced the primary driver. “We’re going to pack a cooler and we’ll only stop to get gas and use the restroom.”

I’m not going to fight this. I will fill up the cooler. But we will stop and most of the cooler’s contents will go untouched.

I printed out the Google stuff plus reservation numbers and brochures from Gettysburg and Hershey. (“Chocolate World is Free!!”) I tucked it all into a red pocket folder. 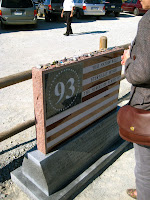 unday morning, we were off and driving. 10 miles out of town we tore into the snack mix and licorice. (Nobody said the cooler had to have actual FOOD in it.)By 3 PM we arrived at Shanksville. The actual crash site is several miles out of this tiny town, in an open space near two lakes. Mike noted that the pilot chose a good place to crash….then rethought that.

The crash site is several football fields away from the memorial where there are plaques, flags and other memorials. A park ranger talked about the crash and plans for a more permanent monument to these brave America 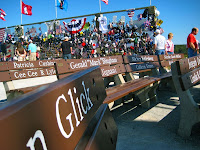 Then, two more hours brought us to Gettysburg. We checked in. The pool was working. Mike had thought that we’d get up at 6. Again, we let that float for a while. “The Visitors’ Center opens at 9. They suggest 2 hours there and 3 hours, max, to tour the battlefield,” said I as I read from my folder.

So, after a really good night’s sleep (no swim) and a quick breakfast, we were off.

If you’ve never been to Gettysburg, an initial effect is of a series of large fields with random sprinklings of grave markers, statues, and rocks. Unlike a cemetery, there’s no uniformity. Various groups have honored the fallen in their own way. 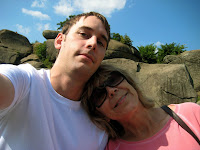 You can climb up to Little Round Top and scan down to where a major battle occurred. You can stand in the place where a most famous battle photo was taken. 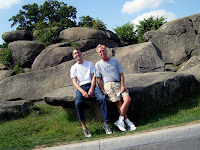 Here are my men, laughing at me, in front of Devil’s Den. Laughing? Well, we were really having a great time. Also, they asked me to take their photo and apparently I did not ‘get’ the camera and thought I had to get in a strange position.

So, after many discussions of people and events, our day on the battlefield ended. Back to hotel and pool. Another good night’s sleep.

At breakfast, the men asked me about the rest of the day. Did I think we’d stay overnight again? 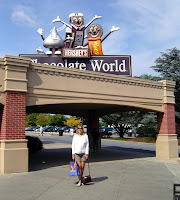 “It depends on how long YOU want to stay in Hershey,” I said. They grimaced at each other. No matter. Into the car and on to Hershey.

And did we have fun? Yes, we did. First, there’s a tour/ride through a mock-up of the factory, showing the steps of turning white soft beans into the yum of milk chocolate. As you move along, little jets of air blow chocolate scent in the air. Glorious. As you come to the end, an animated cow (really) snaps your picture. Zach noted that the photo of us was perfect. “Dad’s eyes are closed, I stuck my tongue out, and Mom has never looked happier.”We did not purchase that photo.

We bought tickets to attend Hershey University, a 30 minute program that ended with confirmation of a Masters in Chocolate Tasting. A tough curriculum but we decided we were up to the challenge.

We were given 6 different kinds of chocolate and a bottle of water to cleanse the pallet between tastes. We learned that one should not bite and chew chocolate. One should break a piece, smell it at the break and then place it on the tongue to melt.

As we are now graduates, let me tell you that different chocolates sound, smell, and melt differently. Fruity. Robust. Tart. Sweet. Grainy. Smooth.

And, how did Hershey’s kisses get their name? When the machine drops the little dollops of chocolate on the tray in that distinctive form, it makes a pucker noise.

Hershey DOES have a gift shop, about the size of a professional stadium. You can p 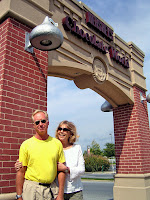 urchase everything and anything made by Hershey. You can have a snack (chocolate cake/tart/pie/brownie) a drink (chocolate coffee, anyone?) and can make custom printed kisses on a conveyor belt.

Hershey, PA rates as educational/touristy. You CAN buy a shot glass and little spoon with Hershey printed on it and take home a diploma. I opted for a T shirt in distinctive Hershey chocolate color.

As it was noon, we held a brief meeting and decided to drive back home, a 10 hour marathon which included a few stops.

Our trip was a success. We’ll need to do this again.

Posted by BolingersCottage at 12:29 PM