Hangin' with the Sisters 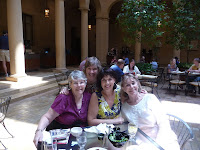 “I’m goin’ to Kansas City
Kansas City here I come
I’m goin’ to Kansas City
Kansas City here I come
They got some crazy little women there
And I’m gonna get me one”
So this year’s Sisters’ Weekend brought the sisters inland to Kansas (aka Kanas) City, MO during its second hot spell of the summer. (NOT Kansas City, Kansas (or Kanas).)
6 or 7 years ago, my sisters and I decided we were becoming a cliché. We saw each other at funerals and weddings. Sure, we live spread out across the states; that was our excuse. But we really like each other and even e-mail and twitter can’t compete woith face-to-face flesh.
So one of us, I’m betting it was Janis, got this organized and every summer, the four of us set aside a weekend to meet up, hang out and have some fun. We’ve met in LA, Charlotte, Winona Lake, and Salt Lake City. This year, with sister Jan in the midst of her latest adventure, that being seminary in KS, the choice was obvious.
The sisters include Jan, Lynne, Kris and Janelle. One of these gals is married to the baby brother but really, she’s so much more fun at these events than he would be.
Setting a date is tricky but once we agree on that, Jan goes to work with her travel agent. That lady labors to get the air travelers to the airport at about the same time and also coordinates departures in an efficient manner.
Jan remains the financial secretary. There was no election but really, no one complains. She lets us know what ¼ of the cost will be and we send her the money. If she has figured correctly…and so far, she’s batting 1000…everything is covered with that payment. If there’s a balance at the end of the weekend…and this is where it’s so good for Jan to handle this…it gets deposited for next year. At least one sister is uncomfortable with balances and would find something to spend it on…for the sisters, of course.
Speaking of ‘things for the sisters.’ We have amassed a few goodies that we share…bracelets with sisters’ charm, monogrammed tote bags, visors, frames, and SISTERS T shirts. Kris and Janelle were walking through the airport in these fine purple shirts when a woman asked them, “And where is your gym?” 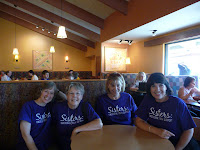 Jan’s daughter, Sarah, lives in KS with her husband and two boys so we were off to their house for dinner and lounging around the pool. Then we checked into nice digs for the night.
Saturday, we toured the Nelson-Atkins Musuem of Art. Even the entrees in the restaurant were works of art. We also drove into the center of town for some shopping. Some of us are bigger on shopping than others. Some of us retreated into a coffee shop for a nice iced latte.
Then, someone in the car mentioned that she had heard of this place where there’s a 24/7 prayer meeting that’s been going on for almost 10 years. “It’s called the International House of Prayer, I think.”

“You mean IHOP?” asked the comedienne.
“Actually, yes. Its web site is IHOP.org.”
So we fired up the GPS and searched. I will let the curious check out their web site. Suffice it to say that we entered a large auditorium with areas labeled and set aside for “Intercession,” “Healing,” “Praise,” “Worship,” and “General Prayer.” At the front, on a stage, a praise band was playing at a low volume. Through the doors came a steady stream of volunteers, sliding lanyards and ID over their necks. 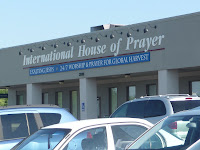 We stayed only a short time but the gentle din of audible prayer continued unabated. According to their materials, the prayer service began in September 1999 and has continued uninterrupted. For a carload of life-time church attendees, this was a unique place in God’s landscape.
Lots of people link Kansas City and BBQ. Not the sisters. For Saturday night, we had 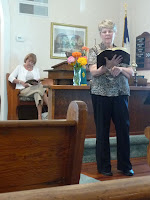 reservations to Lidia’s Restaurant---fancy, Italian, and down by the river.
Sunday morning, three sisters drove to a small Methodist church whose current pastor is sister Jan. So we worshiped together, led by the seminary student.

Kris and Janelle had flown in on Friday and flew home on Sunday. I had chosen to drive, a 10 hour trip, all expressway. A young, cool friend of mine (I’m fortunate for an eclectic batch of friends) had loaned me a series of books on CD and all that time alone was a good time for me. Mike had thought I could bring him some ribs from KS. Hmmmm..in a car with barbecue sauce for hours? I told him, “They ran out.”
Like many penciled in summer activities, I wasn’t certain that I would be able to meet with my sisters. But like many dates in the summer, our current situation freed me to be with these special friends.
God’s goodness affords us gifts in many forms. This weekend, He surrounded me with my sisters’ love.
Posted by BolingersCottage at 9:26 AM