The Launching of The Blub

If you are of a certain age, you can hear Linda Ronstad's dulcet tones as she croons this song. It was always one of our favorites so when the hub got ready to launch the first boat (I believe it was some little sailing thing), he named his ship after Linda's song. This was long ago, before texting and other kinds of shorthand messaging swept the world.

Thinking he was being OH SO CLEVER, he carefully stenciled BLUBYU on the stern. But then he showed it to the family: Allyson, a very precise speller, and Zach, who was just learning to read.

"What's Blub You?" she asked.
"The name is BLUE BAYOU," said the captain.
"No way, Dad. It's Blub You. You left out a letter."
Zach chimed in, "Blub blub blub YOU," he chanted.
"Knock it off. Don't you know who Linda Ronstadt is?" (They did not.)
"Is the paint dry, Dad?" asked Allyson.
"Why do you ask?"
"Well, I guess we're stuck with Blub You for our boat."
And Blub You it remained.

In fact, every boat we've owned ended up being called Blub You. And, as Bolingers are wont to do, we shortened it to Blub.  Or The Blub. (Only recently did we consider that 'blub' might be connected to the noise one makes as he goes under for the third time....blub blub blub.)

So last week, it was time for the First Mate and the Hub to launch The Blub. It is a two-man operation with me 'just doing' whatever he tells me. HE can back up a trailer; I can not.

The biggest challenge is that he is left-handed and, even after almost 38 years of marriage, he forgets that I cannot read his mind. 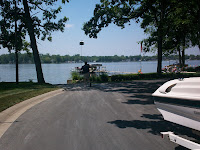 Next, we drive to the boat launch. Winona Lake has only two. This one is on the island. It is an island code of honor that we never never never tell day visitors how to find this launch. You might notice, in the center of the picture is the Ritz Carlton bird house that is the topic of the next blog entry. 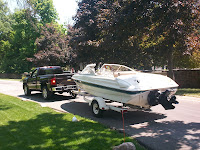 Mike backs the boat up. Really this is quite the skill. I may have tried it once or twice, under his instruction. I end up with the boat twisting back to the driver's window. Not good. I am more useful standing by the side of the ramp, as a kind of guide. Should he run over my toes, he's no longer centered. 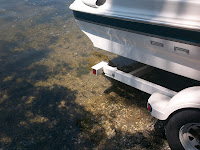 Back, back, back until the trailer wheels are in the lake. At this point, he gets out of the truck after engaging the emergency brake (DON'T FORGET THE EMERGENCY BRAKE! he says as he locks it on)

At this point, the captain boards his Blub and the First Mate, foot on brake, lets the boat s-l-o-w-l-y slide back, back, back until the hull can float free of the trailer.


This is because the drama of Launch Day is just beginning. 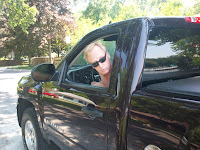 Every autumn, we take the Blub out of the lake. We scrub it up all shiny, inside and out. The Captain drains this, checks that, fills those and declares that his ship is ready for winter. We store it in the garage until spring. But, somehow, over the cold months, something usually happens to the Blub. On Launch Day, right at this point in the narrative, as First Mate stands on shore, boat line in hand, the Captain settles into his seat and fires up the engine. 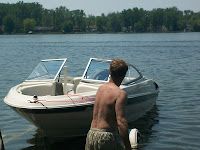 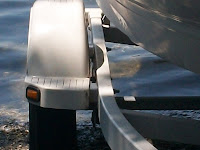 And sometimes....no, make that, almost always, the engine fails to fire. He tries. He chokes it. He speaks to it. He yells at it. And then, First Mate Lynne pulls it back to the trailer where we reattach it and drive to Patona Bay Marina for a tune up. It will be two weeks before we can try again.

I believe that's why we launched early this spring. We figured in those two weeks.

HOWEVER, the Blub fired up. First time. No choking. No yelling. 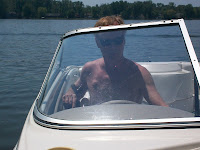 Yeah.
I believe I may have left early one year, assuming that the ship was ship shape. So another direction is,
"DON'T LEAVE UNTIL I'M MOVING." 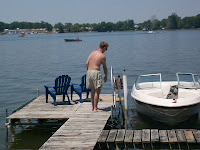 All ready to play.

Posted by BolingersCottage at 9:04 PM