Somehow, mothers know what is best for their children.  This is an immutable law of childrearing.  Each generation of mothers begins with certain rules that were handed down by their mothers.  The new generation starts with those proven rules and modifies them appropriately to reflect changes in society and new information concerning the raising of children.  The goal of all mothers is to produce a young adult that is polite, respectful, intelligent and accomplished.  Producing such an end product would be simple for all mothers, except for one universal problem…children come with fathers, who have not a clue about raising their offspring.

My wife, the evil Lynne, is an excellent mother.  It always seemed to me that she was born to the challenges of motherhood.  I do not know where she learned the things she just seemed to automatically know about our two children, Allyson and Zachary.  Lynne instituted a system for caring for the children which encompassed almost everything they did from the time they got up in the morning till they were tucked into bed at night.  Lynne rode those children like a Marine Corps drill instructor.  Nothing escaped her iron rule.

Every night all Lynne had to do was issue the order “Time for bed, get upstairs and get ready.”  Both children would obediently march upstairs like good little soldiers and take their bath or shower, brush their teeth, put on clean jammies and crawl into bed to await being read to by their mother, who would give them a good night kiss, a last drink of water and tuck them into bed.  She only had to give the order and it was done without complaint because both children knew that you do not mess with the Lynne.

Many years ago when Allyson was about six years old and Zack was about three, Lynne took on a long term project at church where she would be gone every Wednesday evening from about 7 pm to 9:30 pm.  The children’s bedtime was 7:30 pm, so I would theoretically be responsible for putting the children to bed.  Lynne knew intuitively that I was incapable of performing this seemingly simple task, so on the first Wednesday night she gave the order to the children to get ready for bed before she left.  At 7:30 pm all I had to do was tell them to go to bed.  I could handle that…barely.

When 7:30 rolled around I gave the order for the children to be bagged.  Off they went with surprisingly little grumbling.  My sole task out of the way, I took a shower and crawled into bed, figuring I would watch some mindless TV program or maybe read.  I got something to drink and settled in to await the return of the Lynne.

All was well for about 20 minutes when I heard the creak in the floor coming from the hallway outside my bedroom.
“Zack, are you out there?”
“Yes.  I am thirsty and can’t sleep.”
“All right, get a drink in the kitchen and go back to bed.”  No reason to get out of my warm bed.
After a short time, I heard the faucet turn on and off, then silence.  Then the creak again.
“Zack, are you still there?”
“Yes.”

“Do you want to watch TV for a while?”

He practically flew into my bedroom, leaped over my dozing Golden Retriever, Buster (who had staked out the lower half of the bed) and crawled under the covers.  I figured I had at least two hours before the evil Lynne returned.

About five minutes later, I heard the creak of the floor again.

“Allyson, are you out there?”
“Yes.  I came down to check on Zack.  Where is he?”
“In bed with me watching TV.”
“Why does Zack get to stay up and watch TV?  He is supposed to be in bed.”
“Shut up, Al,”  Zack fired back.  I knew I had a problem now.
“Do you want to watch TV with us?” I inquired.
“Yes,” she said.
“Come on, then,” knowing I was outmaneuvered.  Like Zack, she streaked into the bedroom, stopped to give Buster a pat and crawled into bed.  So there we were, the four of us, happily bagged, needing only to get back to proper beds before she-who-must-be-obeyed came home. 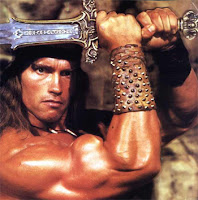 “A really great movie,” I replied.  “It is called Conan the Barbarian. You’ll like it.” 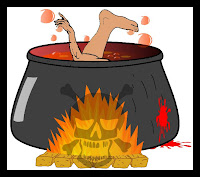 Before I go further, for the benefit of you who have never seen this cinematic masterpiece, it starred the former governor of California, Arnold Schwarznegger, and a statuesque Swedish beauty named Brigitte Nielson, who was not cast for her acting ability, but because of her other assets. Both of them.  The movie featured lots of heads and arms being severed from the bad guys by Arnold, wielding his oversize sword.  There was lots of gratuitous nudity and sex, as well as nightmare images and, best of all, a human sacrifice scene complete with a boiling cauldron of severed heads, arms, legs, and hands.  A perfect movie for young children who are going to bed, right?

We watched for about two minutes, when Arnold (Conan) ran somebody through with his sword.

“Mom is really going to be mad if she finds out Zack watched this movie,” warned Allyson. I considered her insightful comment.

“You are right, but what she doesn’t know won’t hurt her.  Zack, can you keep your mouth shut?” I inquired.  Brigitte was having difficulty keeping her leather halter top in place over her substantial assets.

“No way, Dad, but she will find out.  She always does.” This from my precocious daughter.  Arnold shot someone with an arrow, fake blood gushing from the wound.

About this time Zack said, “I’m hungry, Dad, can we get something to eat?”
“Me, too,” said Al.
“All right, I’ll go get something,” I responded.  I rolled out of bed and went to the kitchen.  I found an unopened quart of chocolate ice cream.  I got one spoon out of the silverware drawer, returned to the bedroom and crawled back into bed.  The cauldron appeared to be filled with pea soup.  A severed head floated to the top.

“Great!  Chocolate ice cream!  Can Buster have some?” yelled the kids in unison. 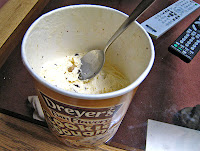 Quickly forgetting that ‘ice cream at bedtime’ and ‘eating in bed’ was forbidden, Zack chimed in.
“Me,” he said.  I handed the carton and spoon to him and he carved out a mountainous bite and slammed it down.  He handed it all to Al, who took a bite and handed it back to me.  And so it went for at least a half hour.  Black robed creatures were waving their capes around the soon-to-be-slaughtered. “Mom is really going to be upset, Dad, if she finds out Zack was eating chocolate ice cream this late.  He is going to have nightmares,” said Al.  (How does she know these things, I wondered?  That generation to generation thing?)

After all that ice cream, Zack said, “I’m cold.”  So I reached down to the foot of the bed and pulled my prized blue, satin eiderdown comforter out from underneath Buster.  Not without a growl. I wrapped the three of us in the comforter so that only our heads showed.  Zack had the ice cream underneath.  Arnold chopped off another head.

And so it went for about thirty minutes.  All was well in the kingdom of Dad.  That is until about 9:00, thirty minutes too soon, when we heard the back door open and close!  The Mom! Back early!

The kids promptly ducked under the covers.  “Be quiet and don’t move,” I whispered. “We will wait until she takes her shower, then you tiptoe upstairs to your bedrooms.  All right?”

Into the bedroom marched the Lynne.  “How did it go?” she asked.

“I am going upstairs and check on them.  Did you have a bedtime story?”

“Kind of.” I responded.  About this time, I heard a giggle from under the covers.  The Mom zeroed in on it immediately.

“Are those kids in bed with you?”

The twin traitors threw back the covers and said, “Hi, Mom.  Dad said it was OK if we stayed up and watched TV with him.”

“We had chocolate ice cream, too. Want some?” asked Zack, handing her the dripping carton and much used communal spoon.

“I can’t believe this.  The one time I leave you in charge, you break all the rules.  They are children, Mike.  What’s the matter with you?  Do you have any sense at all?”

“I guess not,” I confessed.  I thought I was done being yelled at when Arnold cut out the bad guy’s heart and held it aloft, blood dripping.  The Lynne looked at the TV screen in horror.

“What are you watching!?  This is completely inappropriate for children,” she shouted. 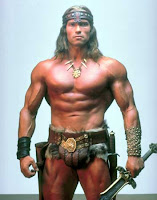 “We are watching Gonad the Barbarian,” said Zack. Arnold threw the still beating heart into the boiling cauldron of man parts.

“What are you thinking, Mike.  Zack is going to have nightmares all night.  I can’t believe this!”

“You kids get upstairs to be right now.  Move!  I will deal with you tomorrow morning!  You have both been very bad.  You know the rules!”She had made her case.

“Good night, Dad,” they said in unison.  “We had a really good time tonight.”

“Don’t even think about it, Mike,” warned the Lynne.  And that was pretty much the end of it.  By the next morning the Lynne had calmed down and the kids seemed to have survived their first solo evening with Dad.

I am tempted to tell you that on the Wednesday nights that followed, I conformed to the Lynne rules.  But that would be a lie.  I am a lawyer, right?  I do not follow rules well.  I am the Dad, right?  Dads don’t know about no stinking rules, right?

So in the weeks that followed we ordered out for delivered pizza on Wednesday nights.  I did not worry about the lingering smell of garlic and cheese in the bedroom.  Or the crumbs under the sheets.  Or the tomato paste smear on the covers.  Or the uneaten piece in the box under my side of the bed.


The Lynne never said a word.  After all, it was Dad’s night, right?

Posted by BolingersCottage at 8:23 PM