In Everything Give Thanks?

As a veteran of Baptist Sunday School, I have memorized (for prizes!) little snippets of scripture. These early bullet points were designed to plant seeds in the hearts of children; the hope was that they would flower in later life. It was and is a good plan.

When those seeds pop up from time to time, I often discover that the context altered the meaning of some of those verses. And, without context, some of God’s promises and direction seem odd, mean, impossible, you name it.

Rejoice always, pray continually, give thanks in all circumstances; for this is God’s will for you in Christ Jesus. (I believe the bullet point was “Thank God for everything.”)

ALWAYS? CONTINUALLY? In ALL circumstances? Really? With all the troubles in the world, in my world, surely Paul included a context, something that would excuse you (me) from these absolutes. So, I grabbed my Bible and gave 1 Thessalonians another read. And all you Bible scholars know what I found out. In this early epistle, Paul writes to encourage a church. And this passage, near the closing, is NOT surrounded by a context that excuses you (me.)

So, I am to REJOICE. PRAY. GIVE THANKS in ALL circumstances.

Ok, thanks Paul. Nothing like the impossible. Of course, I know that this is what God wants me to do. He wants me to try. I need to break a spiritual sweat trying to please Him in this way. 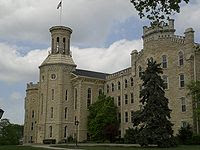 Thank God (really) that He puts models and teachers in my path.

Way back at Wheaton College during our sophomore year, Mike and I took a literature course together; the professor was fresh and new the classroom: Dr. Joe Hill McClatchey. He warmed to us. Mike was a well-read guy who followed most of Joe’s allusions. I was charming and Mike’s girlfriend. Dr. Mc. became our good friend. Later, he tried to turn me into a scholar but even as that failed, he remained our great friend and mentor. 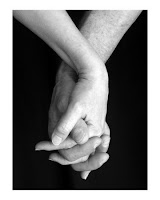 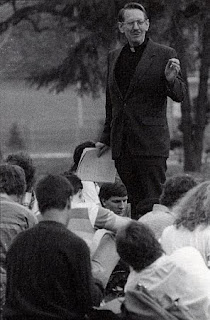 oe’s traveled a fascinating spiritual journey: He was raised as a holiness charismatic. Over the years at Wheaton, he traveled on and, at the end of his life, he was an ordained minister in the Episcopal Church and the Church of England. We shared many interesting discussions where he pointed out scripture that could be interpreted as supporting glossolalia, the speaking in tongues. I assume he was a practioner, believing that this gift was a necessary sign of the indwelling of the Holy Spirit. And I doubt that his later acolytes participated.

Joe and his wife Barbara also served as examples to the college community that marriages consecrated to God can take many forms. She was a pre-Renaissance scholar. Joe loved the Victorians. Dinner guests might find themselves within the never-ending debate about GREAT LITERATURE. We would exchange glances across the table.

any rate, one time in the midst of his/my frustration at ‘not getting’ deeper meaning in Victorian literature, our conversation turned to praise. He told me that he often had to practice praise, that when he felt really down, he knew what he must do: He would get on his knees in a private place and begin thanking God. He would name specific things that he was thankful for, even as he might be grinding his teeth about some other aggravation. Sometimes, he told me, his thanksgiving was pretty lame. “Thank you that the floor is not cold. Thank you that my wife laid out the corduroy trousers today. Thank you that the custodian cleaned my office and emptied my trash can last night.”

He said that sometimes it took 5 minutes. Sometimes it took 50 minutes. But eventually, by thanking God for whatever he could, his heart would open and he could thank God for those things that had him grinding his teeth. (hopelessly concrete students?)

I’ve tried this. It works.

Another lesson came, unexpectedly, amid the tweets and twits on Facebook. One young mother wrote:

That certainly fits the bill of ‘in everything.’ Except this is NOT an exercise. Her young son, now 7 months old, is a living miracle. Since his birth, he has been bathed in prayer for God’s intercession in multiple problems. Born with many challenges, the latest was some sort of problem that required an stoma and a by pass for his bowels. Mom (and Dad) had to learn how to care, clean, and tend to this new development.

No one seemed to know if this was going to be permanent, but it seemed (to me, at least) as just one more huge mountain that God was expecting them to climb.

Apparently, baby's colon healed, doctors rehooked his plumbing and, I mean it, Mother’s joy jumped off the page with “Thank God for Poopy Diapers.” She, by the way, has two in diapers so she really IS in a mode of praise.

Then, I look around here. We continue to face challenges. There have been some bumps in the road. And we don’t have any idea where this road is heading or when it will end. But God makes it easy for us to praise Him. He shows me clearly (and concretely) how the situation is made simple for us.

Also, there is so much joy in my home. Last night, the boys were up in the middle, sitting in the kitchen, and making music. For hours.

So today, I will thank God for mentors and teachers whose lives continue to teach me to rejoice, pray, and praise Him.

Posted by BolingersCottage at 10:25 AM