...and the rest of the week was a wash

We were both pretty beat come Tuesday. The headache was gone but with no sleep, we lazed around even more than usual.


By Wednesday, Mike was still feeling rung out. I happened to brush his forehead (kiss!) and realized that he was hot hot hot. Time for the thermometer: 103 degrees.

Because chemo messes up the immune system, Mike is susceptible to infection. And we have instructions to go the the hospital if he runs a fever. I reminded him.

"I want to go back to Kokomo, to my doctor's hospital," he said.

So we called ahead to let them know. (On one 'emergency' visit, we sat among the coughing and sneezing, in the waiting room for an hour. Mike's doctor insisted that this would not happen again.) It took 80 minutes in afternoon traffic but I DID hit all green lights. Inside joke.

Again with the tests: various fluids, X-rays, CAT. The hospitalist, a tiny man from Pakistan who looked 18 (face it, when you get to be my age, they all look like kids.) It was late late late when he said Mike would be admitted; I drove home for a restless night.

By mid morning Thursday, with fluids in and fever down, the hub was looking much better. On a regular diet, he took two trays; then friend Tome brought him a large Frosty and the nurses kept him supplied with lemon ice.

Here's where we are: his oncologist sat on his bed and said, "Mike, I don't want you to EVER leave this earth. But, I sure don't want to write 'infection' on any certificate." So, since Mike has had two infections since March and because his WBC is very low, the doctor announced that he's getting a vacation from chemo.

So for the next two months, no trips to the oncology center, no needles, no poison. She wants hims to build back up and he will.

ALSO, she said that his latest CAT shows "no change." That means

Friday, they let him leave after a transfusion. It was about 6 PM and we both decided to crash at the home base, driving back up to the lake on Saturday.

Saturday was to be the big fireworks. The day, hot and humid, had been one big blue sky. Town folk were setting up their places for the show. Then, out of nowhere, the wind picked up,the sky turned dark and the sky opened up again, complete with its own light show. The storm lasted until almost midnight.

So this evening, 24 hours later, I see a clear sky, I see the barges on the lake, and I see our chairs, waiting for us on the pier.

We know, friends, that so many of you pray for us. And that's one reason that I want to keep you in the loop. 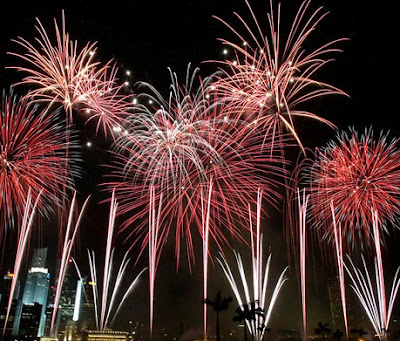 Tonight, all is well. I hope, like us, you'll have a great Independence Day.
Posted by BolingersCottage at 8:33 PM