Do Something They Will Remember

One of the many wonderful things about being a friend and having friends is that on occasion your friends do something unexpected for you that gives you indescribable joy. This happened to me this past weekend.

The lovely Lynne and I took a long weekend in Ft. Lauderdale. We intended to goof off, play in the water, and do absolutely nothing of worth, except have fun. When we go to Ft. Lauderdale, we always visit two of my friends, Brent and Brian Hermann, who both live there.

Brent and Brian are yacht brokers. They buy and sell luxury yachts to people all over the country and the world. We are talking about boats costing several millions of dollars. You can tell that they love their work and it is obvious they are very good at it.

I got to know Brent and Brian when they were frequent visitors to my lake house. Brian loves sailing and Brent loves flying airplanes. I like both. You can see the connection. Put the three of us together and there is never a dull moment. There is not a lick of sense in any of us when we are not supervised by a responsible adult.

I called to give them the info on when Lynne and I would arrive. I got a call back telling me not to schedule anything for 3:00 pm on Saturday, as they had a surprise for me.

Promptly at 3:00 Brian picked me up in his Land Rover and off we went on a 45 minute drive. We ended up at an aviation community near Orlando. The beautiful houses surrounded a private airstrip, which was bounded on both sides by concrete taxiways. Each house had a hanger with a driveway leading to the taxiway. The taxiway could be used to get to the take off position in your airplane or be used to drive out to the highway in your car. I figured out that the surprise was probably going to involve flying. 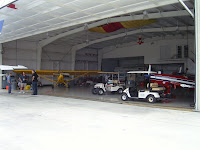 Lynne and I got out of the car and were introduced to Ted, who had been working on one of his five airplanes. The hangar behind Ted's house was colossal. Ted and Brian spoke privately for a minute and then Ted informed us that his flying buddy, Mike, would be here shortly, as he was inbound in Ted's Piper Navaho ( an eight passenger, twin engine private plane). 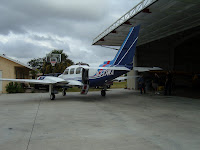 A few minutes later I heard the roar of two fire walled Lycoming engines as the Navaho streaked over our heads about 100 ft off the ground at 250 knots. Mike pitched the nose up into a tight left bank, threw down the gear and flaps, and plopped it onto the runway. Nicely done. He taxied it to Ted's house and got out. Introductions were made all around.

Mike said to me, "I understand you can do some aerobatics?"

"Maybe a little," I replied.

"Let me go get my plane and we will have some fun with it," said Mike. Off he went in the golf cart.

About five minutes later, I heard a very throaty growl of an idling engine as Mike taxied up in an Extra 300. For those of you who are unfamiliar with this airplane let me simply say that if you were planning on flying the world aerobatic championship or the Red Bull air races which have recently been on TV, this is the airplane you would want. It has no aeronautical purpose except to do unlimited aerobatics. It is built so strong that the pilot will be incapacitated before the airplane breaks. It weighs 900 lbs and has 350 horsepower. It is an animal. It is not for amateurs. I was very concerned and definitely intimidated. I was going to get to fly this thing? 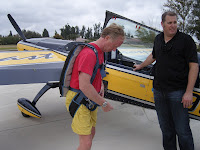 "Let's go," said Mike. I put on my parachute and strapped into the plane. Mike got in behind me and fired up the engine. We taxied to the takeoff position. I noticed that every time Mike blipped the throttle, the airplane torqued to the left. This thing had power! 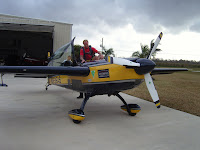 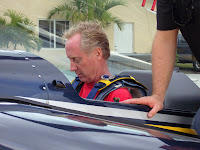 Rolling into takeoff position, Mike said," You set? I'll get it off the ground and then it's yours."

"Light it," I said, trying to be cool. I braced myself for the takeoff roll.
Instead of hitting the throttle, Mike said, "Oh, I almost forgot, I never fly this thing without my tunes." Suddenly, "Sweet Home Alabama" came blasting over my earphones, as Mike hit the throttle. The bird rocketed down the runway and leaped into the air and started climbing. Mike flicked it into a right knife edge turn as we shot over the top of Ted's house. A quick waggle of the wings and we were gone. I was in heaven.

There was a low overcast with a 1500 foot ceiling. As were approached the lower layer of cloud, Mike said, "It is all yours. Have fun."

I took hold of the stick and promptly pitched it up 45 degrees , corrected it, and pitched it down 45 degrees. All unintentionally. Any tiny left of right movement of the stick made a 30 degree bank angle. I was wobbling all over the sky.
"Wow, is this thing sensitive!" I said.

"Give it a couple minutes, you will get used to it," Mike said.

I fiddled with it a little more and discovered that if you flew with the stick between your thumb and index finger, it smoothed out. Problem solved.

"See that break in the clouds up there?" Mike asked.

"Let's try to shoot through that little gap and see if we can find some clear air and sunshine to play in."

I aimed the plane for the gap and sailed through it into clear air in front of us. But on either side were dark clouds going up to maybe 10,000 ft. We were in kind of a giant hallway framed by clouds. It was clear in front of us and above us, but not to the sides.

"I think that this is as good as we are going to get today, but I think there is enough room," said Mike.

"It looks good to me," I said. I then pitched the nose up just a hair and flicked the stick to the right. The Extra instantly rolled 360 degrees in about one second. Wow! That was quick!

I picked up 160 knots, and pulled the stick back. The airplane went vertical pulling 7 g's on the way to the top of the loop. I lost all color in my vision as I grayed out at the top. As I went through the top of the loop inverted and started down the back side, color came back to my vision. I started to pull out of the loop at the bottom and I grayed out again. 7 g's will do that to old pilots, and young ones, too. That airplane would load up the G's like nothing I have ever flown.

"Well, I can see that you can fly. Do whatever you like", said Mike.

So that is just what I did. I did loops, slow rolls, aileron rolls, snap rolls, a spin, a hammerhead, an Immelman and a couple of Cuban eights. All the while listening to Lynrd Skynrd, Allman Brothers and AC/DC. It does not get better. I was having the time of my life. As I have often said, there is no fun like having fun with a lethal toy.

But it did get better.

As always, I flew until I got sick. I told Mike I was queasy, so we headed for home, picking our way through the clouds. Up over one, under another, and around a few. It was breathtaking. Eventually we popped out under the overcast with in sight of the airstrip.

"Your airplane," I said and wiggled the stick to give it back to Mike.

Sure enough, there was a B-17 flying straight and level at our 10 o'clock. It is not every day you see a real life, vintage WW 2 bomber actually flying.

"Let's get over there and check it out," said Mike. With that said he turned to intercept the old bomber, which was giving rides to paying passengers at the Pompano airport.

We pulled up along side about 100 yds away and waggled our wings two or three times. Eventually they waved back. This was just too good to be true. There we were flying formation with the bomber that had won the air war in Europe in WW2. Too cool.

Then, to my astonishment, Mike said, "Your airplane, do something so they will remember us." I sat there thinking for a few seconds, and then rolled the plane inverted and flew in formation with the old bomber, upside down. We waved, and they waved back. I laughed out loud.

It does not get better than that. A hard turn to the right and down we went to an uneventful landing.

Writing this, I am so grateful to my friends, Brent and Brian, who arranged all of this. What else can you say but "Thanks guys, I owe you big-time." 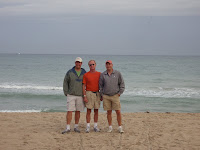 As the commercial goes, some things are priceless.

Mike Out.
Posted by BolingersCottage at 6:39 PM