Son extraordinaire prefers his perch as an observer. He's one of those quiet mullers, taking in the scene, the noise, the undercurrent, and then making a quick remark that sums it all up.

He chuckles at his parents and their quirks, habits and choices of expressions.
Apparently, NO ONE calls it a clicker. "Maybe back in the '80s." NO ONE calls it 'The Net" as in 'surfing the net.' And, believe you me: NO ONE comes within a foot of a computer screen with his/her finger.

Not that he doesn't have his little ways, having lived on his own for a few years. This is why, if I purchase extra milk, I will find all cartons open in our less-than-huge refrigerator. And, of course, there's that ritual of opening up said refrigerator and staring, wistfully, at what is NOT there.

A growing amusement for the Zach is the growing friendship between the Mikes, his dad and our next-door-neighbor. I have mentioned him before, he with all the tools, all the equipment, all the skill, and an infinite source of optimism.

Our Mike has had a nodding acquaintance with neighbors as he has been busy at his law practice. Now, with that distraction gone, he is discovering that we live in a great neighborhood and have pretty cool neighbors. I'd say Next Door Mike is the coolest.

His wife Ann once told me that she knew when she married him, she'd never have to worry about fixing things. Defining THINGS as broadly as you will, she was right on.

Next Door Mike has tools big and small. Where you might have multiple screwdrivers, he adds to that clipping tools, mowing tools, blowing tools, and many many other tools. I have no idea what their uses are. As for storage, well, there's the requisite garage and basement work room. Plus, a recent acquisition, a nearby oversized storage unit, has been named the ManCave by the hub. I cannot do it justice but besides toys, it has a movable staircase and flashing lights, a snack room, an outside picnic area, a car lift and engine hoist. 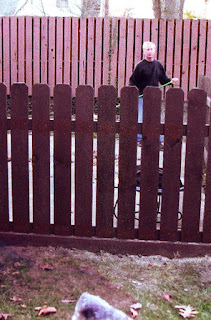 At any rate, when the hub decided to tear down our old dog fence and replace it, Next Door Mike said that he hoped we'd wait until his day off from the water company. He wanted to be a part.

And so he was. Ann snapped The Two Mikes. 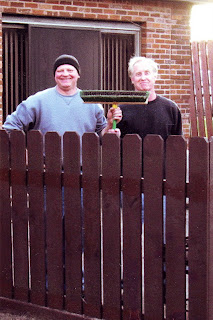 Posted by BolingersCottage at 8:51 AM