It's Always Sunny in Florida

I have three girlfriends (ladies, all) who have interesting relationships with the hub. One insists on hugs whenever they meet. Now, the hub has not been one for hugging much until his illness softened him. When we run into her, we know what’s coming. She will grin with her entire face and say something like, “Comeeeer, you. Where’s my hug?”
And they hug.
One loves us both but has trouble reading the hub, who has been known to say and do obscure things where it’s difficult for her to react. Is he kidding? Is he needing something? Is he nuts? She just smiles widely and says, “Oh, Mike.”
Another is a neighbor at the lake who has been known to get in heated discussions with the hub. When he gets cantankerous or says something just to provoke, she will call him on it. He loves it.
She is the one who mused recently, “Who knows why God has chosen to answer these prayers? We can’t know the mind of God.”
Actually each friend has said something like this to us. One suggested that Mike would have never retired if he hadn’t gotten sick.

“True,” he had to admit.
She adds, “And look how God has used you, is using you.”
Humbling.
One said that she thought that one reason was so that Mike could find out how many people love him. He will wriggle here but she’s absolutely right.
In the weeks following diagnosis, cards, letters, phone calls, e-mails clogged our various repositories. We received over 500 cards from friends, clients, colleagues, and people from our pasts, all telling us that they were praying for us. You know who you are out there.
Mike had me save all of them.
Some included written narratives of something Mike had done for them, with them, to them, that had changed their lives and/or for which they will always remember him.
Those are stacked carefully in a designated drawer. Some moved us to tears. Some we read over and over and over, out loud, to each other.
Now here’s the thing. As a teacher in this town for 35 years, I’m actually used to being told I’m loved, certainly not by every critter who has sat in my class, but by enough that I don’t doubt that somewhere out there, when they talk about teachers, my name will come up affectionately.
Mike, on the other hand, had no idea how many people care for him, how many...yes..love him, and how his life and work have made a difference in so many lives. While that’s sad on some level, we can all praise God that he’s given so many people a chance to say to him w 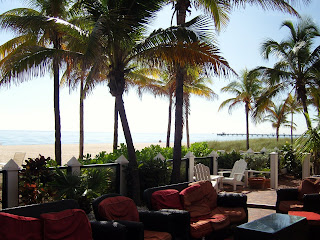 hat they might have said about him, when he’s gone.
So awash in all this love, let me tell you about our little trip to Florida during the first week of November. When it looked like I’d actually get the hub to agree to go somewhere, we started to do the research and make the plans.
He had said that he wanted to “rent a convertible and drive to Key West.” Plan A: We would fly to Miami and drive down. 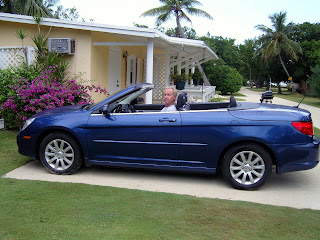 But wait. We have a friend in Fort Lauderdale. Could we fly in there? Yeah, sure. Plan B: We shifted location and would make the drive after spending the day with the friends and a good night’s sleep.
Long time ago, we had lots of Brians in our life. Canoe Brian created a patented kayak carrier. Boat Brian fixed boats in Winona. The Fort Lauderdale Brian was Clothes Brian. Mike met him a decade ago when he was selling custom made suits and shirts in Indianapolis.
Now Clothes Brian is F.L. Brian, who along with his brother Brent, owns The Catamaran Company. They sell ocean-going ships. We did not realize that 11/2 was the last day of the Fort Lauderdale Boat Show, where dealers make 60 – 70% of their annual sales, so Alternate Plan B: We added a day to Ft. Lauderdale so as to not interrupt their business.
By the way, I believe this was a first time we have traveled during the 'off season.' We learned that you miss a lot: noise, crowds, kids, lines.
It was great fun hanging out with the Bs and their families and then we started our trek to Key West. As followers of this blog know, the hub and I have different travel motifs. I thought we’d just get on Highway 1 and drive until we ran out of Highway One. 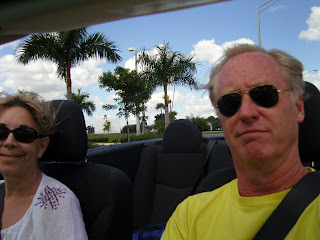 Hub wanted a map. “A real map, too. Not one of those Google maps.” Imagine.

It was a good call because my plan would have taken us through miles and miles and miles and miles of stop lights where HIS helped us by pass on a bypass.
Even on the better route, we hit heavy traffic. I was amazed that about every 5th billboard was selling liquor. We’re not big drinkers, but in the Florida sun, I can see the attraction. One that showed up regularly was for some sort of whiskey. The sweating glass was half full with those clear, irregular shaped ice cubes and a little swizzle stick tilted rakishly to the side.
Don’t recall the brand. So much for successful advertising.
The Keys are notorious for their laid back attitude and life style. I saw lots of spas and massage places and, not coincidentally, no law offices. As you get farther down the keys, certain words and phrases take on altered meanings:
Resort
Underwear
Open at 9
No (smoking, jaywalking, parking)
As it was Election Day, folks lined the streets in Marathon, holding placards for their candidates. One vintage lady was dressed in a long white gauzy number. She had nothing on under it.
“I’ll vote for her guy,” said the hub.
We had not eaten since breakfast, thinking we would find something Alas, there was no place to eat south of 77 mile marker. I guess restaurateurs figure that it’s too close to all the places in Key West. We, however, had not eaten since 8; it was 2:30. We pulled into several “Lounges.”
“We don’t have actual food here. Beer nuts and chips. I have some frozen taco bites in my freezer. Ya want me to go and get them?”
Well, no. We found a Hampton’s Inn with an empty (but open) Outback Steak House. We were ready to gnaw on our waitress’s leg so the fact that they didn’t have some menu items did not dissuade us.
I hope I don’t disillusion you. It turned out that the idea of Driving to the Keys in a Convertible was much better than the reality, at least for us. It’s about 120 miles, much of it through heavy traffic. It was hot. Yes, I know, Florida. Twice we were stopped because a drawbridge has slipped a gear.
Having left a beach in Lauderdale, we remembered that the Keys aren’t known for their beaches. Fishing, drinking, diving, drinking, sightseeing, drinking, and did I mention drinking? We decided to cut short the Keys part and get back to the beach. Plan C 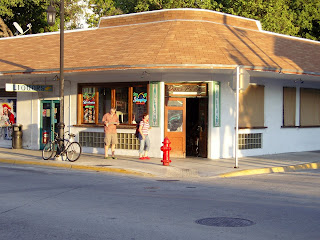 But, before we turned around, as we were close, I wanted to find a bar that is owned by our neighbor at the lake. His name is Don. His place is Don’s Bar. We found it, several miles east of the funky historic district. We met the bartender and shared some liquid with several Ernest Hemingway look alikes.
It was getting dark as we turned around to return north. Right there, in front of us was a huge orange full moon, rising and reflecting on the water. Allyson used to call this ‘a face moon.’ That face was smiling as we drove back to Lauderdale by the sea.
With an extra day in Lauderdale by the sea, we had more time with the B’s. They took us motoring in an electric boat, up and down the coast of Fort Lauderdale and through numerous waterways lined with huge, I mean huge, houses. Really, I thought some were hotels. In front of many were moored sea-going yachts. 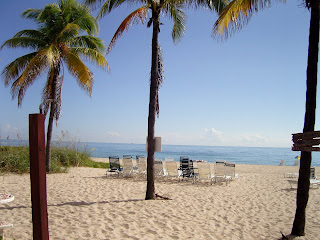 We also had time to play, really play, in the waves. The wind kicked up white caps and huge rolling waves. We waded out, not too far, and either rode those waves or let the water crash into us, tossing us around. We laughed and laughed.
Down the beach, some younger men were kite boarding, something I had never seen. We walked to them and watched as the wind sometimes lifted them and as they rode waves powered by the wind.
Mike said he’d like to try it. I think that means a return trip. 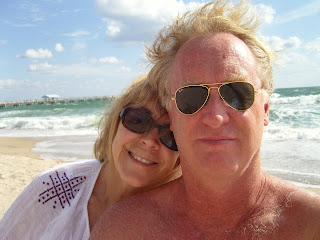