Dates: 10/9 and 10/10
Where: Dallas, TEXAS (don't mess with...)
What: Medal of Honor Foundation Award Dinner
Why me?: Sister of wife of honoree: Steve Amerson
And he's?: http://www.steveamerson.com/
The soldiers who have been awarded the Congressional Medal of Honor are heroes. Sometimes, all too often, it is their family that collects the medal when it is awarded posthumously.

This weekend's goal was to convey awards to three men who have contributed to the success of the foundation and have demonstrated their commitment to our troops. Senator Sam Johnson, Bill O'Reilly, and MY brother-in-law, who also sang several soul-stirring numbers. His S 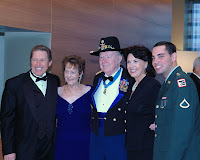 tar Spangled Banner is the best!
The real stars were the Medal of Honor recipients, including Brian Crandall who was portrayed by Greg Linnear in the film We Were Soldiers.
(Steve with Brian Crandall with his wife, sister Kris, and their son, Matthew.)
I had the privilege of meeting many of these truly humble heroes.
But I'm also kind of cloistered here in the middle of Indiana so meeting the famous was fun. 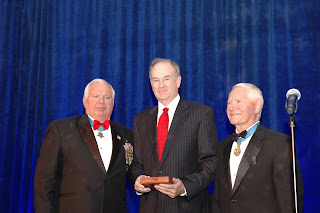 Guess who? I introduced myself, telling Bill I'd love to talk education with him. Then I gave him a BolingersCottage blog card.

And then there was Ross. Yes, THAT Ross. He volunteered for photos with anyone who came within a few feet of him.

PLUS, I had time to hang out with baby sister, Kris. Fun in October. 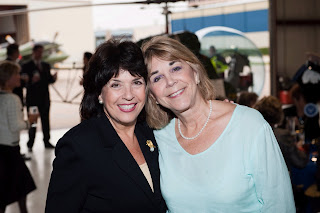 Posted by BolingersCottage at 5:11 PM