Not the way he would have chosen 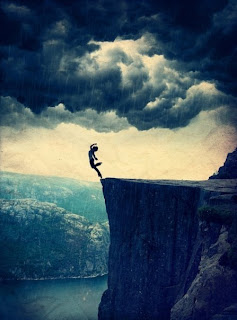 Do not go gentle into that good night,
Old age should burn and rave at close of day;
Rage, rage against the dying of the light.

Though wise men at their end know dark is right,
Because their words had forked no lightning they
Do not go gentle into that good night.

Good men, the last wave by, crying how bright
Their frail deeds might have danced in a green bay,
Rage, rage against the dying of the light.

Wild men who caught and sang the sun in flight,
And learn, too late, they grieved it on its way,
Do not go gentle into that good night.

Grave men, near death, who see with blinding sight
Blind eyes could blaze like meteors and be gay,
Rage, rage against the dying of the light.

And you, my father, there on the sad height,
Curse, bless, me now with your fierce tears, I pray.
Do not go gentle into that good night.
Rage, rage against the dying of the light.

So the haunting words of Dylan Thomas take us through the desire to live; and remind us of the inevitability of death.

More than a few times in the last four years, the hub has said, “This is no way for a man to die.” Mike sometimes sought out friends who had witnessed a cancer death. He would ask and/or they would volunteer the grisly details. I still stand amazed at what some people will share with a cancer patient. But I don’t blame them; this one went asking.

Then, he would slip into a funk.

As we sit here together with Nurse Nancy who works her magic, I see that I will have no dramatic stories to tell. Mike’s passing will be peaceful, quiet, and pain free. This is what we have prayed for and God has supply Mike’s final request.

trying to race a Great White while scuba diving on the Great Barrier Reef.
or
missing a step while running with the bulls in Pamplona
or
snapping the main sail while battling a sudden typhoon

or
racing down a path in the Boys’ Club in Winona Lake, bumping a hidden tree root and flying over the handlebars
or
climbing into a wind sheer and then boring in at Oshkosh
or
just about anything than slipping, quietly and quickly, into a gentle rest where we can say our goodbyes and and tell Mike tales.

So, this is the way the world ends
Not with a bang but with a whimper.

Nothing dramatic. Just peacefully slipping away on this beautiful summer day.
Posted by BolingersCottage at 3:43 PM