Because so many of our Blog Friends pray for us, I want to keep you as up-to-date as I can. THIS entry is a little grisly, with some medical details so I’ll rate it PG-ick.

I am not, by nature, a pessimist. I KNOW a lot of pessimists…..show them the doughnut and they’ll point out the hole…you might lose your job tomorrow so prepare for poverty today…the world is going to end so stop living. I have figured that some people like to brace for the worst, protecting themselves from disappointment.
I’m more blissfully ignorant of what might happen and tend to enjoy what’s going on right now.
Except when it comes to Mike’s illness. After the initial shock and 3-month diagnosis, he went into remission, I went back to school, and life went on. Then, stuff started to grow. It was microscopic but was causing trouble. When he found out he must get an ERCP every 3 months, a palliative measure to ‘relieve pain in terminal patients,’ I found myself hanging from appointment to appointment, filling in the interim with life. I kept….make that KEEP, waiting for the boom, the ‘that’s all folks.’
I saved an image of the biliary system on my desktop and would give the evil eye to parts of it on a regular basis.
Word about the eye: beginning teachers are encouraged to work on their stare, on their disapproving glance, on the wordless, powerful expression of “Oh no, you don’t.” I have it down. Plus, as a mom, I cultivated an even MORE powerful expression, although it was less useful with biologicals. Anyway, I can beam that look. 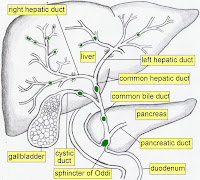 So, I would call up that drawing and glare, stare, threaten, vanquish various spots: lymph nodes, trees, ducts, sphincters and etc.
More than a few times, Mike told me to knock it off.
I don’t always follow his advice.
Quite a few years ago, a couple of thugs broke into our home and stole some stuff. As is true of most criminals, they were stupid, having stored their (our) bounty in a collapsible red back pack with MOB on one side and BOLINGER on the other. They did not get very far. I was furious. One of them had been a student of sorts in a remedial English class. How dare he? What a violation of whatever trust I had placed in him!
I intended to attend their trial, sitting in the front row, giving them my stare. THAT would fix them!
Ok, well THAT was stupid. Like they cared. Besides, they took a deal. They were never sure how those police officers found them, sitting in their mother’s dining room. (She had called the cops, being a friend of the family.)
So, why did I entertain that the evil eye might shrink a few glands and lesions? Hopeless.
We’ve been to many appointments; we bring more trepidation to some than others. Lately, we heard about visible lesions and such. (The head throbs. The ears ring.)
THEN, in recent weeks, the hub’s pain began to rise to occasional unbearable levels. He was sick to his stomach; had all sorts of intestinal rumblings and discomfort; would then get voraciously hungry and gorge; and then, well, the meal appeared again, in all sorts of varieties.
NO one here can miss that he’s lost weight. And the pain continued. Out at the oncology department, several trips earned him intravenous pain meds and the order to increase his oral meds. How much? Double. And when that doesn’t work? Doubled again.
So last weekend, he was groggy, foggy, unsteady, wild-eyed, and depressed….”I can’t live like this.”
And once again, he said to his wife, “This is it, Lynnie. I’m dying.”
And this time, well, I found myself leaning into his verdict.
So, his oncologist said he should move up his next ERCP 3 weeks because that might help.
Today was that trip. I don’t know what the doctor expected but he beamed as he came into the recovery room.
First of all, there was no indication of infection. Old stent out; new stent in. Then, he mentioned that for the first time, he had to navigate through what turned out to be yesterday’s lunch, still filling Mike’s stomach.
The pain medications can slow digestion. This can cause all sorts of pain, none of it related to cancer. There are some simple over-the-counter remedies which we have put into place.
And, quite suddenly, we are back to several months ago, when Mike was smiling most of the time; he was eating eating eating. He was sleeping quite well and feeling, well, a whole lot less sick.
So, we go from “I’m dying,” to planning our anniversary celebration in June.
I don’t, for a minute, forget that we are blessed with so many people who pray faithfully for us. We continue to marvel at the gifts we are given. Daily.
Mike had asked God to let him finish the semester at Ivy Tech. Friday is the last day. He likes that “Bolingers finish what they start.” So, 8 days later I end this semester.
Once again, God has said that He’s not quite ready for Mike yet. And that’s fine. There’s plenty of time for that.
Posted by BolingersCottage at 6:49 PM