So Let's Trim the Dog

Our little Ivy, an interesting mixture of terrier, mutt, and terrier, occasionally needs a trim.

I, myself, am all about letting the professionals tackle the task. I drop her off messy; I pick her up all clean and fluffy and neat…..and really glad to see me.

The Princess does NOT like the grooming experience. One local ‘shop’ consists of the chain smoking owner and a succession of shady employees. The boss is the constant and the others change with the seasons. At her shop, though, I can drop off the dog at 5:45 in the morning and she’s ready by 3. Very convenient to my schedule. One hitch, however, is that they charge an ‘attitude’ penalty for the Princess. I believe she makes her discontent known throughout the procedure.

A lady in Warsaw groomed the dog early this summer: it was difficult to get an appointment as she is booked with regulars, but she found a window of time, three weeks after we called, and worked her magic on Ivy. There was no extra charge, although her base rate is higher.
No matter. The Ivy was clean and coifed for much of the summer.

When the hot, horrid July weather stretched on for three weeks, Ivy developed an itch that caused her much distress. The vet suggested Benadryl which helped. But her scratching left her droopy and matted, much like the rest of us.

One afternoon while I was somewhere else, Mike got the idea to trim the dog. He had watched, fascinated, as our nephew groomed HIS dog. The hub decided it couldn’t be too hard. Not sure how it went (or WHO actually clipped the dog) but when I arrived back, the trim coupled with a trip to the Laundro-mutt gave the Princess a renewed beauty.

The last few weeks have given Ivy the chance to scamper and scavenge in two locations and she was looking pretty ratty. I suggested a bath. The hub said, “Let’s give her a trim first.”
Assuming he knew what he was doing, we walked down to his sister’s house where the trimmer is stored in the garage. 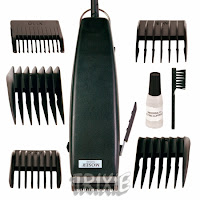 The standard Dog Grooming Trimmer Kit consists of the electric trimmer and several ‘guides’ or ‘trimming heads’ that are snapped on the trimmer. Without the guides, you’re going for the Hoosier buzz cut so popular with mothers of little boys.

“Hold her while I start on her back,” directed the love of my life.

I leaned over and grasped Ivy by the collar and circled her upper body with my arms. My head was resting on her shoulders. The buzz of the trimmer commenced.

I concentrated on two things: holding the dog firmly and guarding my hair. In 37 years of marriage, I’ve suffered a few ‘accidents’ while engaged in partner activities. The oft heard reply from the hub, “Hmmm. I never thought THAT would happen.” A quick slip of the trimmer and I’d be minus bangs or chunks of hair on the top of my head.

After about a minute, Mike suggested that we take a break. I loosened my grip and sat up.

There were no guides on the head of the trimmer. Mike had buzzed much of the rear flank of our dog.

“What do you think?” he asked, smiling.

“She likes it short like this, doesn’t she?” he asked.

You see, once you start on the buzz cut, it’s a commitment. You can’t exactly scape ONE part of the dog naked without continuing.

So, we continued. I held, I turned, I lifted. This went on for an hour. Under the white coat, Ivy has dappled skin and some old age bumps. They now gleam. We have removed the camouflage.
Finally, Ivy’s fluffy tail and the scruff around her face, the part that is ALL terrier, were all that was left to face the trimmer. I suggested that we trade places.

I clicked on the trimmer guide and basically combed through the remaining coat.

So, now our Princess is sporting her new ‘do.’ So fortunate she’s not very vain.
Posted by BolingersCottage at 9:11 PM