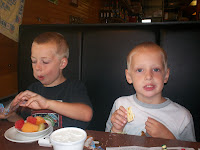 We grabbed a bite at the Windmaill Grill in Kokomo. It features, besides windmills, a train that circles its track near the ceiling. Alas, the train was off the track.

But, as always, the food was great.

Take a peak at our weekend at Winona Lake. No less than the US Army gave Dr. Al an unexpected leave so she said that she knew she needed to come home. She and the boys arrived on Wednesday afternoon for a long weekend. 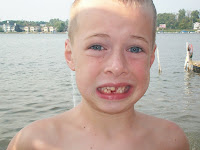 Drew had been playing with a loose tooth. Uncle Jim offered a sure-fire tip; Drew "manned-up" and flipped out his own tooth. His reward? A Golden Coin from his great uncle.


Grampa watches the Water Olympics at dock side. 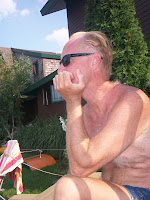 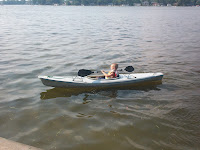 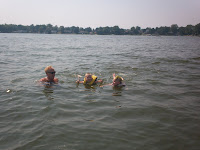 Local folks joked that the Texans had brought their hot weather with them. One of those not-really-so-funny jokes. While we were sweltering, our guests felt right at home. 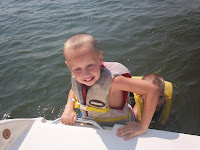 That meant, of course, lots of time in the lake.


Noah at the stern of the ship. 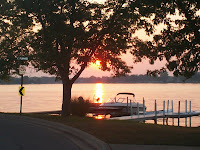 We also ended up with a whopper of a thunderstorm. Allyson was so pleased, she just sat outside and got soaked. 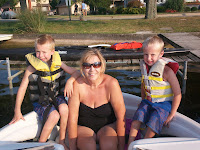 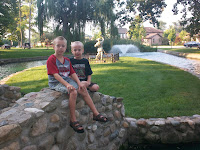 A not-so-typical quiet moment by the Winona Lake Duck Pond.

Saturday was also so, so, so hot: 97 degrees but a nice breeze. The boys and our niece's son, Titus, spent the afternoon by the pier. They spent hours and hours of running and jumping off into the water, climbing up the ladder and back to the run. As the afternoon wore on (and the adults wore out), they took a watermelon break by the sea wall. Each grabbed a chunk of cold watermelon and rested for just a moment.

Early Sunday morning was time to drive to Indianapolis. As Allyson has been away for 4 years, she wanted to visit with her former neighbors. Here Dad and Daughter share a brief word of wisdom before we climbed into the car.

The boys, Allyson and I checked into the airport Hampton (I love Hamptons) for the night. Allyson parked herself in the work center while the boys and Gramma hung out in the pool.

Monday morning, we drove across the way to the Indianapolis International Airport. Aunt Sherry waved from inside the terminal as the boys waved back. Once Allyson loaded her bags on a dolly, a quick hug and they were gone.

What could be better than some really great fun with our children and grandchildren? Not much.
Posted by BolingersCottage at 7:35 PM