Every six months, letters are mailed from our local courts: You have been selected for potential jury duty. Over the years, I’m sure friends have told me that they received such letters. I probably reacted with feigned interest. Some people respond with, “I’m so sorry.” And there are those with the sure-fire methods for getting disqualified.

The hub has told me numerous times that I would never get called. “The first thing they ask is if you know either attorney or the judge,” he explained. “Since you know all of the judges and most of the lawyers, if you get called, you’ll be dismissed.”

Also, he added that, as a defense attorney, he never, ever wanted TEACHERS on a jury. Why? Well, they’re too smart. And they are rule people. “They tend to see things in black and white. Not good for the defense.”

So, I’ve lived in Howard County since 1973 and never got a jury letter. Until about 6 months ago. Names are lifted from voters’ registration. A pool of potential candidates gets these letters. We are asked to fill out a two sided form with information about ourselves, like whether or not we’ve been victims of crime.

Then, in the course of the term, if a jury must be called, 40 of these prospective jurors get another letter, telling them to show up, in a specific court, on a certain date and time. 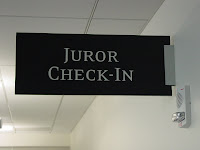 I made arrangements for a substitute teacher and then showed up on time (teachers are GOOD at this) in Judge Jessup’s courtroom.

The viewing gallery was packed. I looked around and recognized no one. One gentleman was Amish, fresh from the fields in his overalls. I mention this only because the next event caused him obvious distress.

First came the judge who greeted us, thanked us, and then showed us a video all about the court system. The Amish gentleman…they shun things like television…turned to the wall and squirmed nervously.

Next, the bailiff called 12 names, mine being one, to fill the jury box. The prosecutor greeted us. The defense attorney greeted us and then the judge greeted us again.

The questioning of prospective jurors is called voir dire, where we were screened for obvious biases or other reasons we might not make good, impartial members of the panel.

The judge reminded us that during the process, no one should take it personally if he is excused. And if we were excused, it’s no reflection on us personally.

And then they began to question us about our personal lives and opinions. The prosecutor started with the first candidate and began to ask questions. He referred to their notes. He had read those profile sheets.

When he got to me, he greeted me as Mike’s wife. He asked how my husband was doing. He said he heard that Mike was back flying. When I said that yes he was, the prosecutor smiled and said, “That’s great.”

Then, the defense attorney asked questions and also asked me questions about my husband.
At this point, the judge interrupted and explained to the defendant, and everybody else, that he and both attorneys were friends of my husband. He also said that they had asked the defendant if he had a problem with me as a possible juror; the defendant had said that he did not mind.
I added that the Detective was a student of mine when he was in 9th grade. Smiles from him.

After questioning all 12, the attorneys scrawled some notes and handed slips of paper to the judge.

The challenges: each side gets a certain number of challenges. For the non-lawyers out there: there are challenges for cause where the attorneys can submit reasons to axe certain prospective jurors. They can also challenge without supplying the reasons: these are peremptory challenges.

Each attorney scribbled on little sheets of paper and handed these to the judge who read them and, I think, approved them. Then he dismissed several members, including the woman who was the sole employee of her business.

I made the cut.

Mike knows almost everything, but not EVERYTHING.

Another first round choice sat in front of me. She began shaking as soon as she was seated. She answered questions in a waivery voice. Still, she made it on the jury.

Five more candidates were called, including the Amish man. The main question for him involved clarification if his religion blocked him from judging others.

He said that this was true. So he was dismissed, also.

I kept watching the back of the shaking woman. Did no one else see her? I leaned forward to ask her if she was ok. At that time, the lead detective, at the prosecutor’s table, also noticed how much distress she was in. He whispered to the DA who asked her if she was alright.

They decided to dismiss her. Shortly after she left the court room, they called paramedics. I think she was just really stressed out.

A few more from the peanut gallery joined us and soon an entire jury was seated, with one alternative. We retired to the jury room to await instructions. So here we were, a group of 13 strangers that would hear evidence and decide a man’s fate.

Strangers, mostly. Two former students. The son of a retired colleague. One of Mike’s clients.
And one said, “Let’s make the teacher the foreman. All in favor?”

We returned to the jury box. On each seat was a loose leaf notebook with papers and pens.
We were instructed that the opening statements and the closing statements were not evidence. We were to listen carefully to the judge, who knows the law. We were to consider only the information t 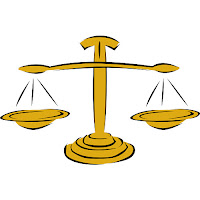 hat came from the witness box. If, for some reason, we wanted a question directed to a witness, we could write it on a slip of paper and give it to the judge. When the time came to deliberate, we could take our notes.

So came the strut and fret. Prosecutor introduced his case: defendant was charged with a Class C felony; he had tried to grab a purse and had used threat of bodily harm. Defense said that she agreed with 90% of what the prosecution avered. However, she said, that her client denied threatening the woman so was ready to plead to a Class D felony but was denying Class C.

Prosecution witnesses. No defense witnesses. It took 2 hours for the evidence to be presented. Then, they summed up their sides and we marched to the jury room.

Deliberation took long enough that we ordered lunch. One juror, who was angry about his property taxes, put in an order for lobster. The judge suggested that he’d have to answer to the county council for that, so juror 5 got a burger.

We took an initial vote and were evenly divided. As the hours went on, we leaned toward the defense.

Our problem with the prosecution came down to 1 point of 5, that had to be proved. Some of us were not convinced that the policeman who took the initial report had done a complete job.
And just like in the movies, we had one dig-in-your-heels hold out. Poor guy. His wife had been killed 20 years ago and because the police goofed, the drunk driver went free. He wasn’t going to let a sloppy cop ruin this conviction.

We argued. He argued. Several admitted that they leaned toward the C but since the majority was moving to D, they were going to go with the group.

Our hold out got a bit angry, said something about the rest of us just wanting to go home…..but eventually gave up.

So we returned our verdict: guilty of Class D felony, which is what the defendant wanted in the first place.

As foreman, I had to sign the official paper that would go back to the judge. Someone forgot to tell me that the unsigned other verdict also had to go to judge. Force of habit, I tear up papers I don’t need. So as I ripped the unsigned form, the bailiff came in with envelopes for both sheets.
I stuffed the ripped one into its holder and both were handed to the judge.

We reentered the courtroom. The judge opened the envelopes, smiled and asked if we had been making paper art in the jury room.

(Cringe….I really wanted to do this right. Courts are all about THE WAY to do things.)

Anyway, the defendant hugged his attorney, the shackles were back on and he was on his way back to jail. We handed in our notebooks and got to go home.

Several take aways: from what I know about criminal law, I was surprised that all of this time and expense went for a trial that could have been dealt. I mean the guy was ready to plead, just not to the C.

Second, I was surprised that the prosecutor kept me on the panel. As the wife of a defense attorney, wouldn’t you expect that I would have sympathies for the defense?

Third: I hope this doesn’t sound corny. I felt that I was doing something important. I knew I was part of the civic fabric of our community.

But mainly: I got to see, up close, what my husband had done during much of his career. I could picture him there, strolling before the jury, cross examining witnesses, winning his cases. That was a treat.

They assure me that once called, you don’t get that letter again for 2 years. So this is it for now.
Posted by BolingersCottage at 7:56 PM