A few weeks ago, my wife and I, along with 43 of our friends, celebrated my 59th birthday at our home on Winona Lake. We were deeply touched by the number of people who took time on a Sunday afternoon to drive 70 miles on a blazingly hot day, to hang out and eat birthday cake in our un-airconditioned house. We were honored and delighted.
We specifically requested that no gift-giving was warranted as the presence of each guest was enough of a present in itself. The suggestion was ignored by several of those attending.
Toward the end of the party, Joclyn Wallace, one of our guests, handed me a present and asked me to unwrap it. Before I continue, let me say that Joclyn and I share an unusual relationship. She and my daughter attended Purdue University together and that is how I met her. Over the years, we have gown close. I often introduce her as my "fake daughter" or my "half daughter". She always sends me a card for Father's Day. We talk to every week. She is a truly delightful, young woman, who has been very concerned about my health.
Allow me to digress. When I got out of the hospital following my aborted liver resection, I was shot to pieces. I could barely move, let alone walk. My physical therapy involved going for a walk each day, trying to go a little farther each day than the day before. It was slow going and very painful.
One afternoon as I was walking, I was literally stopped in my tracks by the fragrance of a blooming lilac bush. I cannot adequately describe the smell other than to say it seemed otherworldly. I was completely entranced by the beauty of the smell. As I stood there I realized for the first time since becoming sick that I was not going to smell a lilac bush again. This epiphany made it smell that much better. As I continued my walk, I was saddened, not at the prospect of dying, but because I would not again get a chance to smell a blooming lilac bush on a sunny spring day.
A few weeks later, I was out for a walk with Joclyn, who had come to visit. I told her about my encounter with the lilac bush. I told her that I had never really smelled a lilac bush before and that it had moved me as one of the most beautiful fragrances I had ever experienced. I told her that it saddened me to think that it was probably the last time I would get the chance to enjoy such a simple pleasure.
Joclyn responded by saying that none of us know what is coming down the road and that maybe I might get another chance at a lilac bush in bloom. I told her that realistically all of the doctors said that my number was up and I needed to get used to that idea. We continued our walk.
So, to everyone's surprise, mine and the doctors', I made it to my second birthday following the diagnosis and operation. Knock me over with a feather! 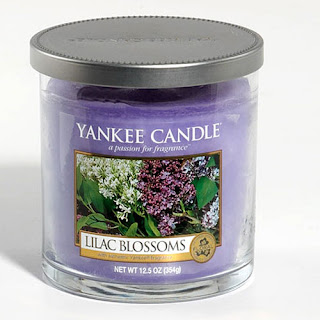 Now, back to Joclyn and the party. I opened the present and what do you suppose it was?
A small candle…scented with lilacs, of course. Thanks, Joclyn. You chose well.
Thanks to all of you who came to the party. Maybe I will make a third one. I doubt it, as the odds are against me. But they were against me on the first and second birthdays, too. Like Joclyn says, "You never know".

Mike out.
Posted by BolingersCottage at 7:05 PM