Have you ever come across something that is old, broken, rusted or abused (kind of like me) and thought to yourself, “I can fix that?”  Or maybe you stumble upon something that has been discarded in the alley and thought to yourself, “Why would someone throw this away? It is beautiful; it just needs a little care.”  This happens to me more frequently than I would like to admit.  It has happened with numerous motorcycles, sports cars, guitars, and old guns.  Most recently, it happened with a bicycle.

Shortly before I got sick, I purchased two identical Trek racing bicycles.  Why did I buy two?  So I could keep one in Kokomo and one in Winona Lake.  Then I would not have to transport a bike back and forth each weekend.  An extravagance?  Absolutely.  But I did it anyway.

Then I got sick.  Figuring I was as good as dead and too weak to ride them, I gave them away to two people who I knew would use them every day.  I gave one to my nephew, Micah Lemasters, who is a really good mountain and road bike racer.  He uses it daily as his trainer, saving his other killer, trick, mega-dollar road bike for races.  I gave the other to my sister Lisa, who would never think of spending that kind of money on a toy for herself.  After her first ride on the bike on her routine training route, she cut her time in half.  Needless to say, she was thrilled.

But I didn’t die on schedule.  So I was now out of bicycles.  I needed a bike.  So I went to my favorite bike shop to see what was available.  Lots of bikes, as it turned out.  And very expensive bikes.   I could not justify the expense of $1500 plotted against my remaining time on this bent planet. It just wasn’t cost-effective. What to do?  I walked away satisfied with my decision not to spend serious money on a new bike (I am so cheap.), but frustrated, because I needed a bike to ride on the Nickel Plate Trail, one of my favorite places.

A couple of weeks later, I was at the lake, when I noticed that my neighbor, Hal Harting, was puttering around in his huge pole barn, three doors from my house.  Before going further, I need to describe Hal’s barn.  It is completely filled with all sorts of oddball mechanical stuff of uncertain and ancient origin, odd purpose, and questionable future.  I did not even realize until recently that there was a sports car in the barn, because it was covered up with stuff.  I am sure that every weird-ass relic in the barn has a story that goes with it and Hal can tell it like no one else.  It is my kind of place to hang out.  You never know what you might find in there.

So I was standing there talking to Hal, when I noticed a bicycle wheel sticking out from under a sheet.

“You got a bicycle there,” I asked?

I pulled the sheet off to discover an ancient 10 speed bicycle.  It was covered with spider crap, dirt, and cobwebs.  The tires were flat, having literally rotted off the wheels.  The leather seat crumbled when I touched it.  There was lots of rust and the handlebar tape was falling off, but there was something about that bike that appealed to me.  Once again, a machine spoke to me.  “Don’t leave me here.  I still have lots of good rides in me and I will last longer than you will.  Take me home with you.”  I hate it when this happens because I am a pigeon for wayward, forlorn mechanical devices.

“Probably forty or forty-five years, I suppose.  I remember buying it new.  I’ll bet I haven’t ridden it in thirty-five years,” he said.

“Want to sell it?” I inquired.

“No.  You can just have it.  I don’t want it and it is just taking up space.”  I silently considered his generous offer.

“I am uncomfortable with just taking it.  How about I pay you twenty-five dollars for it?”

So I pushed it back to my house and started to disassemble it to clean it up and see how bad a shape it was in.  In less than ten minutes I had the wheels off, the seat out and was working on dissembling the neck, when nephew Micah, stopped by.

“Yeah, I just bought it off Hal for twenty-five dollars.”

Micah began to closely examine the bike and the various parts.  “You should be ashamed of yourself,” he said.  “You stole this bike.”

“No, I’m not.  Look at the frame and the decals.  That frame is made of Columbus 531 chrome-moly tubing, hand brazed into investment cast lugs.  A new frame like this, which you could only get custom-made, would cost you $2000, without a fork and any parts.  And that is not a decal on the neck.  It is an etched little, metal plate.  That is so cool!”

“I’ll be back in five minutes.”  Micah left.  I continued to take the bike apart and noticed that the bracket that held the front derailleur on was cracked.  Since it was forty or fifty years old, I figured that was going to be tough to fix.

Micah showed back up carrying a grocery sack.  “Here, you can have this.”  He handed me the sack, which contained a new seat, two new tires and tubes and some other mechanical parts.  “This stuff will fit your bike.  I have no use for it.  It’s yours for free.”

“Got any suggestions on replacing this bracket?”

“That is going to be tough because it is so old.  You might try E-Bay.  Any new derailleur will work, but it will look out of place on the bike.”

“You’re right.  I’ll check the net and my Kokomo bike shop.  Maybe that guy will have something.”

“Doubtful,” said Micah.  “I’ll see what I can find for you at the bike shop here, but don’t get your hopes up.  It is just so old, you know.”  Micah left and I completed the disassembly of the entire bicycle.  I wrapped the broken derailleur and the old bearings in a rag, grabbed the two wheels to be trued, and took them to the bike shop in Kokomo on Monday.

The following day I came back to pick up the wheels and to inquire if he had come up with a solution for the broken bracket.

“I trued up the wheels for you.  Do you know how good those wheels are?” 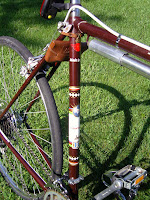 “Well, those are the best components money could buy in their day.  I can’t wait to see this bike.  It’s got a Columbus frame, doesn’t it?”

“Because those wheels were state-of-the-art in their day.  Very cool. I figured that the frame would be the best.” 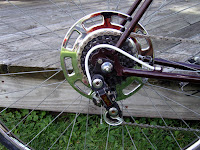 He stood there for a few seconds and then said, “Wait here.  I’ll be right back.  Let me look check something.”  He went into the backroom of the shop for a couple of minutes and then came back to the counter.  “When I bought this business from Charley Sullivan, he gave me a box of really old stuff.  I have never even looked in the box until today.  Here, you can have this at no charge.  I will never have a use for it.” He handed me a small cardboard box.

I took the box, opened it, and to my absolute astonishment there was a brand new, still in the wrapping paper, front deraillieur, an unused match of the one on the bicycle  Exactly what I needed!

Unbelievable!  I thanked my friend repeatedly and left with my wheels and newly acquired treasure.  Little did I know but this was just the start of resurrecting that almost forgotten, forlorn bicycle.

I went back to the lake and installed all new bearings in the crank and neck.  I started the reassembly with every part cleaned, polished and oiled.  I polished the chrome and waxed the frame.  I replaced the chain and installed new brake cables, as well as shifter cables.  I put the seat back on, the kickstand, then the incredibly cool, European air pump that I carefully polished. I then stood back and looked at the completed bike.  Not bad.  Not bad at all.

I decided to take it out for its maiden ride.

Before I go further, for the enlightenment of those readers who do not have a love affair with bicycles, let me explain something you need to understand.  Bicycles frames were originally made of steel tubing, which made them relatively strong, but they tended to flex if you really put pressure on the pedals, like you would if you were climbing a hill.  Frame flex means loss of energy, so the racers were looking for stiffer frames.  Along came aluminum tubing, which was lighter and stiffer than steel.  Then came titanium, which was stronger and stiffer still, but ridiculously expensive. 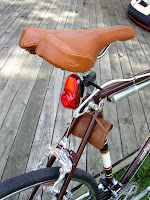 Now, state-of-the-art is carbon fiber.  Very strong, very stiff and extremely lightweight.  And even more expensive.  While the racers were happy, some bicyclists were dissatisfied.  What bothered them were the echoes and creaks that came from the modern frames after hitting a bump.  So what developed was a backlash by bicyclists who did not care if the frame flexed a little; what  they wanted was a comfortable bike.  They did not want to hear echoes, creaks, or feel the jarring, rock hard vibrations those racing frames produced when hitting a bump.  Thus, they went back to ordering custom-made steel frames, which do not transmit the hard bumps and vibrations which are absorbed and dampened by a steel frame.

What is the point of this digression about frames?  It is only to delightedly report that my newly, rebuilt machine was absolutely silent, even when I hit a bump.  Maybe only a bicyclist can understand the pleasure I felt when all I heard was the sound of spinning rubber on the road.  That bicycle is totally silent.

The next day Micah came over and asked to take it for ride.  “Sure,” I said.  “Take it.  Tell me what you think.”  Twenty minutes later he was back with a big smile.  “I love this bike.  It is so smooth and comfortable.  I could ride it all day and not get tired.  Want to sell it?”

A few days later, I took my treasure back to Kokomo to show it to my Kokomo bike mechanic.  He looked it over minutely, stepped back and pronounced, “That bike it ultimately  cool.  I love it.  Want to sell it?”

I told him I did not want to sell it, thanked him for the work he had done on the bike, and headed for the door.

“Wait a minute.  I have something for you.” He reached under the counter and, once again, handed me a small box and a plastic bag.  In the bag was a complete set of new bearings for the crank and neck.  In the small box was, you guessed it, a brand new rear derailleur, just like the original that came with the bike.,  I just about fell over. 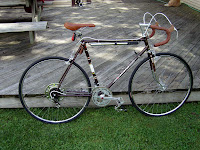 “Take them.  They are yours for free.  I will never use them and I am glad that a vintage bike is back on the road.  Any time you need work done on that bike, bring it in.  It will be a pleasure to work on it.”

“Thanks for everything you did and the derailleurs.  I am speechless again.”  I went back to the lake with my new, old, completely rebuilt down to every nut, bolt, screw and bearing vintage bike, safely padded in the bed of my truck.  So far it has cost me eighty-seven dollars.  It’s worth every penny, and then some.  Another successful resurrection.

Mike Out.
Posted by BolingersCottage at 7:16 PM