Tis the season to be jolly.

Or not. Out there, the push is on. Rush rush rush. Spend spend spend. You hear less "Merry Christmas" and more "Whew, I'm DONE!!!

In here, we have ramped it down over the last few years. And with plans to be in Texas for Christmas, we weren't even going to put up a tree. WE. Well, THAT'S not accurate. Decking the halls falls on me, now that my daughter moved away. She took the task over when she got old enough to plug in the lights. We had really elaborate decor until she moved out.

I wasn't going to put up anything shiny in December. But then, Mike invited our good friends over for dinner. (He hauled out his rotisserie and bought a Moby chicken.) I knew I had to sprinkle some holiday cheer here and there. My solution: a trip to the bargain store where they had a special on a pre-lit tree. It's all of 24 inches so the light is intense. A few of our special ornaments and it is all a sparkle. Wouldn't you just know my luck? Our local department store was GIVING AWAY pre-lit door wreaths. My oh my, all I need is a Yule log. (0r that On Demand high definition Fireplace!)

The dinner, by the way, was spectacular. And then, here's why we continue to celebrate. Since February (i.e. "recurrence"), every planned trip has been penciled in. We did not know if we would be able to go, if Mike would feel well enough. And so was our Christmas trip, which involves air travel. Even after getting all flights coordinated, last weekend seemed to indicate that the trip would not happen.

I'm pleased to say (and this is how God is answering prayers THIS week), the trip is on. On Thursday night, I'll be hugging some grandsons! So, even though the crowds out there are pushing and shoving, I can thank our Father as I drag out the suitcase.

Mike had a scan today, scheduled but scheduled incorrectly, so what might have taken an hour filled most of the day. And then he came home to a letter. A mean letter.

It seems that during the chaos of the closing of the office, some client's case was mislaid. Some sort of inheritance allocation. They want a refund. They will get it.

But in the letter were some hurtful words, striking at the heart of this career attorney. I'm guessing that two years ago, he would have let the words roll off his back while addressing their concerns. But this is later, this is the tender Mike, who would go all sorts of extra miles to help. He said, "Mean, isn't it? No big deal, we'll fix it. They are wrong but it's not worth it...."

Then he lay down and took a deep nap. 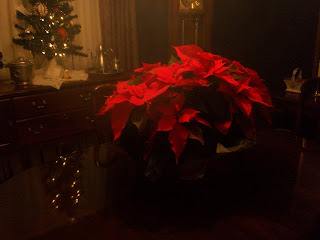 When he awakens, he'll see what another former client sent to us. Along with the plant is a letter telling him, specifically, how Mike had helped this person. How she'll always be greatful and, as such letters often end, that she'll continue to pray for us.

I love how God sends unexpected blessings right when we need them.

From our house, cottage, workshop, and blog: May you have a very Merry Christmas. May you find joy in this holiday season. We serve a mightly God who loves us so much that He sacrificed His dear Son. May the miracle of Emmanuel, the Messiah, fill your hearts with hope and love.
Posted by BolingersCottage at 7:06 PM