Someone broke her hip before she came into our lives. And someone had hurt her. Hurt her bad. It took a year before she would accept pats. She never squatted right as she favored one leg.

She came to us as a trade. She had nipped at a baby who probably got too close to that hip. We traded a docile golden retriever and this little piece to spunk entered our family.

Because one of us was a dog person and one of us was the maintenance, Ivy soon became Mike’s best girl and from that day on, she lived a golden life. She took priority seating at any guitar concert. She got the best pillows on the bed. She sat with doleful eyes at the side of the master when it was dinner time. He would not resist her pleading eyes. On occasion, the cook received instructions about the level of seasoning: Ivy doesn’t like that. Ivy prefers more of that.

At an infamous veterinarian appointment, when Dr. Bob offered a treat, she snatched it away, not really biting but using certainly teeth to get at the goodie. Dr. drew back and sniffed. “Typical of dogs who get fed from a fork,” he said to non-Mike.

Ah, but is any pet, any fury family member, typical?

Mike loved her: she sat next to him on the seat of his truck. In later years, she was a common sight wherever he would go. Dairy Queen and Wendy’s recognized them in the drive through and would get her goodie going. 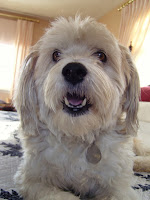 She also learned the halls of Oakbrook Church, Hollingsworth lumber and Moody’s Cycle. All the humans there maintained a snack stash for Ivy.

On a sunny day in June, 2013, she climbed up on the bed and said goodbye to her guy. And since then, she had been my companion and reminder of a sweet man.

Today, if you believe as we do, she joins her guy running free. Good girl, Ivy.
Posted by BolingersCottage at 4:47 PM