The Captain and her Crew 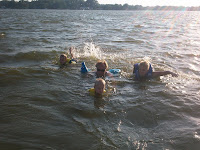 At the risk of offending everyone who has dropped by and/or done something special for us, I must say that the biggest treat of the summer was the visit by daughter Allyson and her boys. Those would be OUR grandsons. 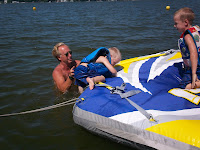 We knew that the Army was giving her a week of leave sometime during these months; discussions back and forth about logistics, time, patience, and etc. culminated in their arrival to spend a week at the lake.

In recent months, Allyson had said that she wished she could just ‘sit on the pier and look at the lake.’ It does for her what it does for her dad. And, the boys are now getting to the age when lake play is great play.
We charted a course that missed a few details. We assumed that Fort Wayne was a regional airport so Allyson flew into Indianapolis. That’s a three hour drive to the lake. And as she said, she planned the flights exactly backward of what would have been better: she arrived after midnight and left at 7 AM, so that was a 6 hour trek for Mike, who volunteered, by the way.
And, as it turns out, there are many non- stops every day from Fort Wayne to Dallas. Fort Wayne is 40 miles from the lake.
No matter: something to refine for the next trip.

I was up when they arrived and helped get the boys to bed, although they would be up again by 7. On Allyson’s bed, I placed the token of a trip to the lake: a trashy magazine about celebrities we don’t know, open to a ‘fashion page.’
It’s an inside joke; she got it. 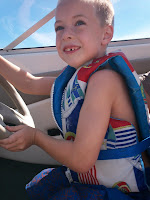 They spent the week with us during the hottest week of the summer, but as Allyson says often, it’s nothing like San Antonio. Except that day when the heat index rose over 100, she conceded that Indiana was coming close.

The adults groused and dripped but not the boys. From breakfast to bedtime, they ran, climbed, swam, biked, rode in the boat, rode on the tube, ran some more, until they dropped. We did, too. 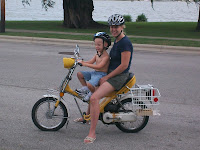 Allyson took each boy on a moped tour of the city. 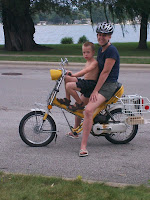 Gramma took the boys to the Warsaw Public Library (air conditioned) for some reading time.
Then, Allyson joined us; we got coffee and sat while she read to them.
Then, back to the lake. 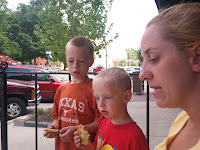 Big milestones: neither had swum much in a lake. They are accustomed to the clear blue of a pool. They decided that the lake is good.
Drew, who lives in a subdivision with steep hills, took the training wheels off and took off on our flat streets. 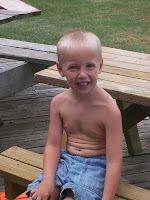 Noah, who is a bit timid but wants to do what big brother does, climbed up next to Drew on the inflatable tube and held on.
We tubed until the grown ups were exhausted; the boys 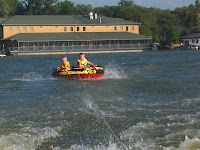 were still giving ‘thumbs up’ for more.
Mike and I shopped at an After the Fourth sale, stocking up on really cool fireworks. Allyson reminded us that fireworks are illegal in Texas so this was a chance for the boys to see some real stuff.
One night, we set up on the cement ledge by sister Lisa’s house, ourselves seated a safe distance, and the big boys lit fuses.
Much fun was had by all although if we charted delight, the big boys would be off the grid.
And every night, Grampa took us to the Ice Cream Shop for cones and cups. And many many drips on chins, hands, shirts, and knees.
Saturday 3 AM (yawn) came too soon and they were off to catch a plane.
Their trip home was eventful: delays, delays, delays: they arrived home after a very long day.
Allyson reports that the boys did ‘just fine.’
They will be back. 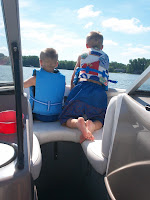 Posted by BolingersCottage at 8:23 PM