A Trip to Indianapolis and Out of the Galaxy

Last Saturday the lovely Loon and I had a date. Unlike younger couples who have "date nights," we, who are older, have "date afternoons," because we oldsters have a tendency to fall asleep early in the evening. Also, we have both noticed that our various age-related aches and pains make their appearance in the evening, making the afternoons more useful for goofing off.

I love the IMAX theater in Indianapolis, particularly when they screen a 3-D movie so I asked Loon to find out what was on at the IMAX. She reported that we had hit the jackpot: there were two 3-D movies playing. One was about the space station and the Hubble space telescope. James Cameron's Avatar was the other. We were gone in a flash, but one advantage of the empty nest.

(Before I go further, I am sure that someone reading this piece is going to take it apart if I use an incorrect term and I can assure you I am going to do that. Forgive me in advance. I am a lawyer, not an astrophysicist, so cut me some slack.)

The space station movie centered on the repair of the Hubble. Apparently, shortly after the telescope began its orbit, NASA determined that its camera lens was warped. This modern marvel was unable to produce any better pictures than could be obtained by telescopes on earth. ( I'll bet someone got fired over that.) So, three years later, NASA launched a mission to fix the Hubble.

The fix involved the rendezvous of the space shuttle Enterprise, in space with the Hubble. Spacewalking astronauts had to open up the Hubble's innards and then replace the faulty parts. All the while, other crew members controlled the Hubble with an ingenious arm that extended out of the cargo bay of the Enterprise. The mission was an amazing feat of astral navigation, applied engineering, human courage and ingenuity. The 3-D images -- astronauts maneuvering in space and performing the repairs -- took my breath away. 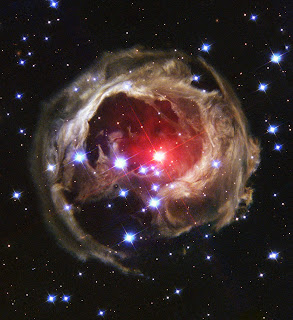 As amazing as the repair feat was, the best part of the movie presented photographs taken by the repaired Hubble. As narrator Leonardo DiCaprio explained what the audience was seeing, I heard people in the theater gasping in disbelief and awe at the images on the six-story high screen. My mind could not wrap itself around the magnitude of the photos.

One of the photographs showed an exploding nebulae. It looked like a butterfly with its wings outspread. The wings were the color of coffee with cream just added. It looked like it had density and form or solidity to it. The entire image was made up of stars and galaxies 90 trillion light years away from earth! (My mind cannot comprehend that number.) It was then explained that the distance between each of the billions of stars in the nebulae was farther than the distance across our solar system. Yet when you looked at the photograph, it seems that the stars must be so close together to give the impression of solidity. Again, my mind cannot comprehend the content of the photographs. 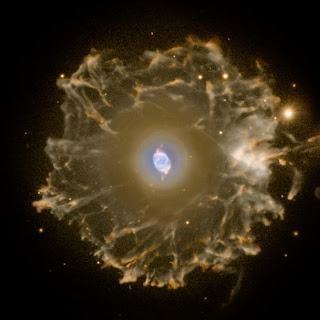 Next came photographs of entire solar systems, separate universes, nebulae, exploding stars, dead stars, galaxies, and other space phenomena. I could have looked at each of the photographs on the screen for an hour. Each one was simply dazzling. 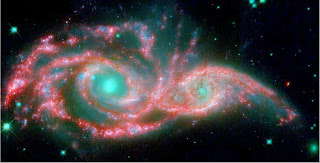 I cannot imagine what scientists thought when they first saw these photographs. I can imagine the conversation between the astrophysicist, who took the pictures, and his wife, who asked how his day was. Did he do anything interesting? He probably sat there at the table speechless, Words would fail at a time like this. Perhaps he just slid a copy of the photo across the table relying on the old saw that "a picture is worth a thousand words."

Or here are a few:

When I consider your heavens,
the work of your fingers,
the moon and the stars,
which you have set in place,
what is man that you are mindful of him,
the son of man that you care for him?
Psalm 8: 3 - 4

"For my thoughts are not your thoughts,
neither are your ways my ways,"
declares the LORD.
Isaiah 55:8 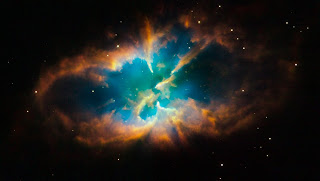 So simple. So true. I do not see how anyone could look at the Hubble images without sensing the existence of God. And then he would be humbled by God's awesome majesty. It is simply inconceivable to me that anyone viewing those photographs could question the existence of God. They reinforce that all was created by the Master Planner. There is order and magnificence in the sky.


Posted by BolingersCottage at 7:35 PM